May’s disintegrating Brexit deal: why musicians must get involved. 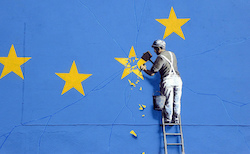 Over the last two-and-a-half years I have come to admire those people for whom Brexit is a turnoff. The mere mention of the word produces a glassy-eyed look, or, perhaps the begrudging phrase ‘I wish they’d just get on with it’ (rather ignoring the fact that what ‘it’ is is exactly the problem). For me it seems to have become an anxiety-inducing obsession. A day like this, when the news is arriving think and fast, leaves me glued to every available news outlet.

As I write, after six government resignations, it seems that May’s deal is dead. We find ourselves in deep constitutional waters. In trying to interpret the mandate given by the British public in 2016 Theresa May has tried, above all else, to accommodate the wishes of the hard Brexit lobby in her own party. Her responsibility as Prime Minister not to crash the economy, not to ignite a sectarian conflict in Northern Island and, frankly, not to ignore objective reality meant, however, that compromise was a necessity. That compromise, unsurprisingly, has pleased nobody.

A survey before the EU referendum in 2016 showed that 96% of those within the UK’s creative industries were against Brexit. Our own straw-pollamongst composers (admittedly a small sample), conducted shortly after the vote, confirmed that bias. If, for any reason, you need to understand the reasons why Brexit might be bad for composers and musicians more generally, I would strongly suggest taking a look at the blog posts of composer Howard Goodall, who has argued perceptively on the benefits that the EU brings in terms of freedom to work and copyright law.

As political events unfold it is important for us to understand what is at stake. May’s deal, a messy compromise, might have brought with it a measure of stability. It is not, however, surviving contact with reality. Instead, hard Leavers and Remainers are playing a high-stakes game that drives us away from compromise and to the extremes, the former towards a purer (and potentially catastrophic) hard Brexit, the latter to revisit the question in a second referendum. The difference between the two, it might be argued, is that the Leavers never had a mandate for a disruptive hard Brexit, so to seek that outcome without further reference to the people is democratically questionable. Remainers, on the other hand, are offering the prospect of settling the question once and for all in a referendum where all options are on the table. This is, then, surely the way forward.

As such I would suggest now is a good time to reengage in this debate. Dash off an email or, even better, a letter to your MP, say something on Twitter. Keep it civil but get engaged. We are not without agency in this debate. Though many MPs are cautious about changing their minds, they will respond to the wishes of their electors, just so long as they are expressed in sufficient numbers.