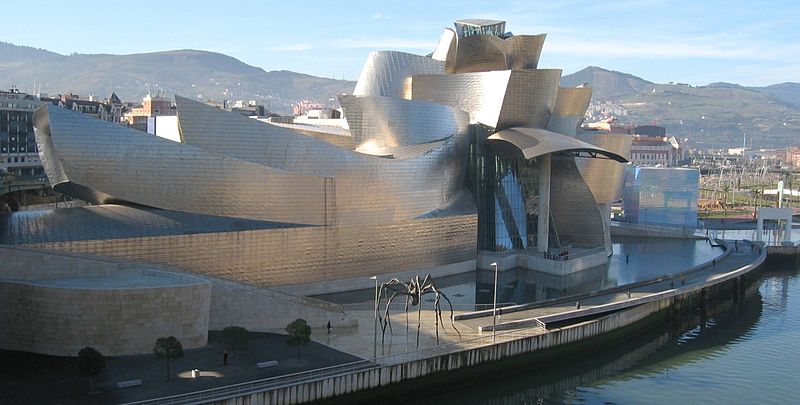 After a visit to some Basque friends in Northern Spain last week I found myself with a day to spare in Bilbao. The city used to be faceless and industrial until the Guggenheim Museum of Modern Art, Frank O. Gehry’s breathtaking postmodern masterpiece, was constructed on the river estuary next to the city’s classical district or ‘Ensanche’. Now civic confidence is everywhere, marked by the perfectly kept flowerbeds and armies of mechanised pavement sweepers. I’ve visited the Guggenheim before, so I went round several other museums first, also taking my time over tapas, cerveza and manzanilla in the Casco Viejo. By the time I got to the Guggenheim, swallowing my pride at the €13 entrance cost, I had four hours in the building before it was to close at 8pm. Ample, I thought.

At first I was disappointed, since the first things one comes across are items from the permanent exhibition in, and leading off, the central foyer, which I’d already seen. Though these are certainly worth a second view, I wondered if my money might have been better spent. But, after walking around Richard Serra’s monumental The Matter of Time, I then came to a room that marked the beginning of a new collection. The first piece was Kutlug Atman’s Küba, which contains 40 televisions of varying types and ages sat upon a variety of sideboards, tables and small chests of drawers with a single easy chair facing the television. On each television a person from Küba, a socially marginalized district of Istanbul tells a little bit about their lives. Apart from the light from the television screens, the room was dark. One could only hear the bubble of chatter from each of the forty people from the town. I sat in chair after chair, mesmerized by the atmosphere in the room and the sometimes moving, sometimes banal, stories being told.

And though, inevitably, some subsequent installations were hit, some miss, this was roughly my experience as I went round the rest of the collection.  There was Thomas Hirchhorn’s Cavemanman, a cave installation lined totally in packing tape with various detritus from every day life strewn around – a commentary on contemporary society; Paul McCarthy’s Tomato Head, based around the old children’s toy of Mr. Potato Head, except with the option to attach or insert sexual organs or, indeed, other items into the various available orifices – an allegory, perhaps, on how we adapt our personalities to suit the situation; and Rivane Neunschwander’s Contingente, a film showing ants devouring a map of the world made of honey –  obviously a statement upon man’s similarly voracious consumption of the earth’s natural resources.

I write about this here because of the musical trains of thought this exhibition provoked in me. As I went around I quickly realized that the four hours I had allocated to it were not nearly enough, and that other members of the public, of all ages, were being similarly gripped. And this likewise provoked feelings of artistic envy. I know I’m not the first person to say it, but it is striking how the most challenging of modern art is so easily enjoyed by the average person. The same people who will, at the same time, deride or ignore the best efforts of contemporary composers. As I thought of this I realized that I was, perhaps, guilty of the same fault. In a single day in Bilbao I had visited, including the Guggenheim, four visual arts museums. It had not even crossed my mind to try to find a concert hall.

One could easily say that visual art has an advantage over music in these days of quick fixes and short attention spans because, if one doesn’t like a work of art, one shakes one’s head sniffily and moves on to the next. Music has to be understood in time. But I don’t think that this is the whole truth. Visual art has to be understood in time too. One has to engage with the work, think about the layers of meaning on offer, unravel its mysteries. The real difference is the way we present music: there is nothing worse than that sense of being trapped in one’s chair in a concert hall listening to something that bores or offends our ears, with starched collars staring at you if you cough. The experience of the Guggenheim underlined to me the importance of the work of our most pioneering composers to get the work out there; in the street, café or nightclub, places where the public can listen in an environment that is more relaxed, or where one can listen for as little or as much time as one feels necessary. People should be allowed to walk away from music they don’t like.

One other thing. Yes, it was a visual art exhibition at the Guggenheim, but many of the installations contained elements of sound. But they were unbelievably, almost laughably limited in scope. Do we collaborate enough with artists? Not only does this strike me as a potentially fertile and exciting area to work but, cynically put, might allow composers at last to participate in the modern art gold rush.