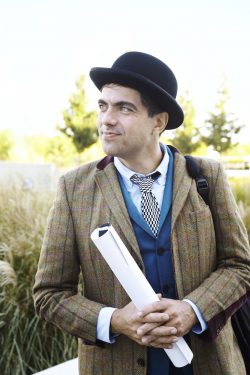 I talk to German composer Moritz Eggert about his life, motivations and new CD Musica Viva 30, which has just been released on the NEOS record label.

I was born in Heidelberg and grew up there, in Mannheim and Frankfurt, the latter being where I spent my formative years. My mother is a photographer and my father (who I didn’t grow up with) was a writer. My background was certainly artistic, but music was not my primary focus, even though I remember clearly that I constantly created music in my head and could imagine the timbre and sound of instruments very precisely. I just didn’t think it was a special skill. I had a good piano education from an early age nevertheless, but not with the goal of actually becoming a musician. I was interested in all kinds of things – film, literature, art…I knew I wanted to become an artist, but I didn’t really know exactly what kind of artist until…

How did you start composing?

…I was asked by a school friend to be part of his band. It quickly became clear that I enjoyed composing music for that band. Then there were more bands, Jazz, Rock, Prog-Rock, and I suddenly found myself falling for music in general. I must have been 15 at that time, and suddenly I realized that I had gotten behind on piano technique compared to others my age. I wanted to play what I heard in my head, and that meant practice, practice, practice…I regularly skipped school to practice piano, which had not a good effect on my grades, obviously. But with the practice came a renewed interest in classical music, and the discovery of more unusual composers like Erik Satie and Charles Ives, which in turn led to my interest in contemporary music.

What was your first success as a composer?

My first composition teacher, Claus Kuehnl, supported me immensely when I started out. He asked me to write a large piece for his ensemble, which became a sprawling half-hour piece called “The 12 Strokes of the Sun-Dial”. This piece was far from perfect, but for me it was a big achievement as I suddenly realized “I can do it”. For the first time I felt like a “composer”, and the rush of being able to create anything that I wanted (at least on paper) was exhilarating. I remember not being able to sleep before the rehearsals – that’s how excited I was. The sound of that piece confused my Rock music friends, so I left those bands and turned to more challenging kinds of music that didn’t need a constant beat. As this experience was so liberating, it counts as a success for me. Later, pieces like the “Haemmerklavier”-cycle, “Neue Dichter Lieben” or my “Football Oratorio” were more important for my outward success, but I always think back on that “Sun-Dial” piece, even though it was never performed again.

There is a vast combination of music and composers that I love. For sheer crazy keyboard virtuosity, I was always a fan of Keith Emerson and Jerry Lee Lewis, but also of the unique style of somebody like Thelonious Monk. For freedom in thinking, I owe a lot to my late teacher, the great Wilhelm Killmayer. Erik Satie and Frank Zappa taught me humour. Hans Werner Henze and Wolfgang Rihm influenced me to discover my personal musical lyricism – they fascinated me more than “abstract” composers that prefer technique over content. John Cage’s philosophy, and the philosophy of Ferruccio Busoni has always guided me. Recently, the discussions with music philosopher Harry Lehmann have given me food for thought galore.

How did you get your first commission?

I guess you mean “paid” commission, which is always a big deal for starting composers. I did some stuff that was paid when I was young – a little film music here, some stage music there, but that were basically all for minute amounts of money. The first “real” commission I got were from Henze and the Munich Biennale, and for “Paul et Virginie”, a puppet opera. I was 25. Since then, I have been very lucky to have always had commissions, but for a long time I also composed many works just so that I could play them (for example “Haemmerklavier”).

Do you have particular techniques – ones you come back to again and again? Tell us a bit about them.

My main technique is trying to come closer and closer to the music I hear in my head. And that means using many different techniques to achieve that. I might switch between completely different composition techniques in a piece just to achieve a certain sound, or sometimes several at once. There are too many to list, but I often work with irregular repetitions based on prime numbers, for example (if I want to create certain textures). I also like to use intervallic chord permutations to give coherence to harmonic developments, but I also invent stuff freely on the spot. My system is to have no particular system – I use what is needed.

What inspires you to write?

Mostly ideas. I really need some kind of “story”, concept or even absurd challenge to write a piece, which is why I often have titles first and sometimes think years about a piece before actually writing it. The orchestra pieces in my “Musica Viva” CD, for example, have been in my head as concepts for ages, I just had never gotten around to writing them. I have many of these ideas in my head, and sometimes the right moment has to come in order to fully realize them. I used to have a sketchbook with all these ideas, but it filled up so quickly that I stopped writing in it, as I would need to have 100 lives to realize them. I only think about the ideas I can actually continually remember, as these are the best ones.

What are you working on at the moment

A new opera for the Komische Oper Berlin, which will be called “M – Eine Stadt sucht einen Moerder”, based on the famous film by Fritz Lang. Barrie Kosky will direct it himself and I very much look forward to this project, as I go back to my Rock music roots by employing 4 keyboarders playing an analogue 80’s synthesizer, combined with an unusual orchestra involving a vocal ensemble in the pit. I have envisioned a sound completely different to what people would expect in an opera house.

Tell us about your newest CD ‘Musica Viva 30’

This is a collection of 2 pieces that I wrote for the wonderful Bavarian Radio Symphony Orchestra. “Muzak” is perhaps the most provocative piece I ever wrote, at least from the perspective of a jaded contemporary music audience, and I have never had so much fun writing a piece. David Bowie died during the writing process, so I have dedicated it to his memory. The second piece, “Mass”, is an experiment that goes back to a question I was once asked by a (non-musician) friend: if all these orchestra musicians are paid, why don’t they all play all the time? Why are there rests in which an instrument doesn’t play? This piece has everybody playing all the time. It’s crazy.

Be true to your calling, as you will not be real if you try to be somebody else. Write what you love, otherwise don’t write it. Don’t write differently to impress somebody. Be your worst critic, but also trust in what you invent, as that is you, regardless of what anybody says. Understand that the listener is not your enemy. Write music that can be decoded by anyone if they want, even by the guys at the Indian takeaway around your corner. Fill your music with love, awesome things and fascinating details that can give enjoyment to anyone who wants to look. Be thorough and careful with every note.

Do you have a routine? A place that’s special

My private special place is my study at 5 a.m. in the morning, when I start to compose. I always prefer the mornings, when things begin instead of end. I love how quiet it is, and how my thoughts are still fresh and not tired. I love going outside a lot; I run every day, do sports, swim in ice-cold water, and since I have started doing this I have become much better at concentrating and working.

Do you do other work as well as composing?

I love to do a lot of different things. Of course I am a pianist, so practicing needs some time, but I enjoy it, as well as performing, also as a singer, conductor or even an actor if needs be. Being on a stage is part of me – I cannot live without it. But I also love to put thoughts to paper, to write articles, to teach and discuss art with other people. I do a lot of different things on any given day, but that are things that keep me fresh and alert. Strange, as I was not at all a sports person when I was young…

There are many more operas in the pipeline (probably too many), and some large-scale projects that are too early to talk about. I would love to write more songs, taking a year off just for Lieder, like Schumann did. But I try to think about what I can achieve during one day, not what I have to achieve in the next few years, as that would drive me crazy. Writing operas is a bit like a marathon, you take step after step, not all the steps at once.