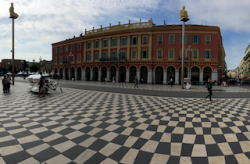 After a wet Pembrokeshire summer I find myself in Nice, capital of the French Riviera. My reasons for being here aren’t entirely (or even partly) musical. So, after a week in the city, trying to discover what the place has to offer is, frankly, a bit after the event.

France’s fifth-largest conurbation has, happily, much to recommend it. What is especially pleasing is that I seemed to have arrived at the right time, since next month the city plays host to the Manca Festival of Contemporary Music (14th–24th November). Transport links to Nice are excellent (four cheap Easyjet flights a day from Gatwick, for example), so you might consider a short city break to catch some of this.

Manca takes place under the auspices of CIRM, one of six Centres Nationaux de Création Musicale (National Centres for Musical Creation) in France, the other five being in Bethany (outskirts of Reims), Albi, Marseille, Lyon and Alfortville. CIRM was founded in 1968 by composer Jean-Etienne Marie, its mission being ‘to promote the contemporary music repertoire, focussing its activities mainly along four lines: production, diffusion, training and research.’ The organisation has strong links locally and internationally and has a special interest in the promotion of electronic music, especially by playing host to composers who create works in its three electronic studios.

Some of these are written especially for the Manca Festival, as is the case in this year’s opening concert, which features premières of two CIRM commissions, Tiantian Wang’s The distant murmur and Yikeshan Abudushalamu’s Divine Light, both for chamber orchestra and electronics. The concert also features two premières by Michel Pascal: Never die and Requins for 16 instruments and electronics.

Highlights from the rest of the festival include, on 18th, Hugues Dufourt’s Burning Bright for six percussionists, an hour-long work inspired by William Blake’s The Tyger with lighting and scenography by Enrico Bagnoli. On 20th there is a live electronic performances given by Gaël Navard. It is inspired by the the discovery of exoplanet Kepler-186f in 2014, the performance wittily billed as a piece of ‘exomusicological’ research conducted through ‘telesonoscopes’, the result being the first performance of ‘Keplerian’ music on their native instrument, the ‘soundplane.’ On 21st is a performance of Phèdre, an opera for solo voice by Marianne Pousseur and Enrico Bagnoli based upon a text by Yannis Ritsos. There are also two concerts of electroacoustic music presented by students at British universities on 19th and, on 24th, an international study day on the theme ‘Geste Musical : Modèles et expériences.’ Three of the papers at this conference are in English, one of which also includes a video projection and live performance.

Prices for all events are very reasonable: many are free, others mostly being 5 or 10 euros.