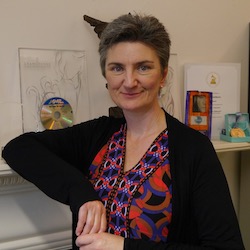 NMC Recordings, a label whose mission is to bring music by British composers to the widest possible audience, will this month celebrate its 30th birthday. To mark the occasion, I talk with its Executive Director, Anne Rushton, about the label’s past present and future.

How did NMC Recordings come to be formed?

Imogen Holst and Colin Matthews (composer, founder and Executive Producer of NMC) set up the Holst Foundation, shortly before Imogen’s death in 1984. Imogen had made it clear that the future role should not be to subsidise her father’s music in the way that most other composer trusts function. Instead she hoped that it would be able to support the work of living composers and the idea that this might be done via recordings, enabling new work to reach wider audiences, had been mooted. Roll on a few years when The Holst Foundation supported a concert at the Aldeburgh Festival, featuring the Philharmonia conducted by Oliver Knussen. There was an audience of 800 but as the concert wasn’t broadcast the Foundation realised that their, not inconsiderable, financial support wasn’t having as much impact as it might – and the idea of recordings was revived. NMC’s first release, under the auspices of the Society for the Promotion of New Music, of Jonathan Harvey’s Bhakti, was in April 1989.

Why was there such a pressing need for NMC?

There’s a perennial challenge for composers in having their work heard. This isn’t just for promotional or financial reasons, not that there’s anything wrong with those. For most it strikes to the very essence of why they compose; to communicate their creative ideas to those who will listen. And with the inherent limitations (financial and logistical) of putting on new music concerts, recording is the ideal way to ensure that work gets heard, and heard again. Back in the late 80’s there were labels which featured occasional contemporary releases, but the representation of living British composers in the record catalogues was very poor: extraordinary to think that, back then, Harrison Birtwistle had only one major recording available (Secret Theatre, now reissued on NMC D148), while Jonathan Harvey had reached the age of 50 without a single significant disc until we releasedBhakti. NMC’s mission was to redress that underrepresentation and in the process we’ve become the dedicated home for the work of composers from the British Isles, across a range of styles, chosen and maintained in the catalogue in the face of commercial considerations.

What does NMC stand for?

Originally New Music Cassettes but with the advent of CD we reverted to the shorter form. Our first website had a rather amusing Random Name Generator which threw up beguiling alternatives such as ‘Never Marinades Cucumbers’ and perhaps now we might be considered more along the lines of New Music Community … Or perhaps given the anniversary, New Music Celebration?

How did you come to be involved with the label?

Having run the Collins Classics label in the 90s, I got to know Colin and worked with a number of composers. I answered an advert to work for NMC as a consultant – following a break from work when my daughters were very young – and joined in 2003 and soon became permanent. I can’t believe that was sixteen years ago…

You have mentioned elsewhere that the extent of what the label does now seems unrecognisable to the early days. How have things changed?

The essence of NMC, I’m glad to say, hasn’t changed; that founding mission is still front and centre of what we do. But the scale and scope of how we deliver that mission has changed immeasurably. Alongside the number of releases (14 in 2019) we now work with a number of University/Conservatoire based contemporary labels (a further 8 releases this year) and have developed a number of valuable artistic partnerships with the likes of the Hallé, Wigmore Hall, Philharmonia, London Music Masters, National Youth Choirs of Great Britain and PRS Foundation. We’ve become far more outward looking, with external advisors joining our artistic planning process, and have been really proactive in targeting an increase in inclusivity in future releases.

We totally embrace the power of digital dissemination to reach audiences and are very proactive in the use of streaming (e.g. through playlists). 2 million tracks were streamed in 2018 alone.

Much of this is possible because of another big change; that of establishing a permanent fundraising function within the organisation. Running a label of just contemporary classical music isn’t (readers won’t be surprised to hear!) a commercial proposition. We bring in only around 20% of our income from sales; as a registered charity the rest is made up through support from Arts Council England and from donations from Trusts, Foundations and individuals.

Would it be fair to say that, in fact, NMC is much more than a music label? I’m thinking, especially, of its many special projects, its collaborations with other organisations and its educational initiatives?

Yes, the other significant way in which we’ve changed is in broadening the ways in which we fulfil our charitable purpose. As well as the artistic partnerships I’ve mentioned above we’ve also collaborated with other organisations to deliver education projects, commissioning and outreach work. We regularly deliver seminars to students and young composers about the recording industry, rights and marketing. Our partnership with London Music Masters will see us release Many Voices our first printed music book and album, of works commissioned by LMM for violinists from grades 2-5 and we’ve developed resources to support GCSE Music and Dance syllabi, as well as a remix tool and our interactive Music Map.

Are there any of these initiatives that you are particularly proud of?

Debut Discs – our series of first full-length portrait albums devoted to the brightest of composing talents. It’s been incredibly gratifying to present such a variety of composers’ work to international audiences and to see the response, in terms of critical reaction and audience numbers, and the impact it’s had on the next stages of the composers’ careers. Many have cited their Debut Disc as being the catalyst for future commissions, performances, awards and composing opportunities and that’s a real privilege to be part of.

Education projects – I’ve long held that if we truly believe in the music we’re championing then we’ll be passionate about bringing that to the next generation of composers, performances and audiences. And of course, children and young people come to contemporary music without inhibitions, and without having to feel there’s a jump from traditional repertoire which is largely unknown to them.

Give us an idea of the breadth of the catalogue as it stands today.

250 albums featuring the work of 350 composers and presenting the full gamut of compositional styles with numerous digital only projects. And, of course, nearly all of our recordings are world premieres and not available anywhere else!

How will NMC be marking its thirtieth anniversary?

We’re having an event to Launch Many Voices, which is also a chance to thank our existing supporters and hopefully entice a few new ones! We’ve got a bumper schedule of releases including these highlights:

We’ve produced a free of charge Mixtape on cassette (a nod to our original name!) to celebrate the last 30 years and are giving this and other merchandise away at concerts featuring composers associated with NMC across the country.

And there is a special anniversary appeal?

Most definitely! As I’ve said, we can’t do all this without support. Every year we raise almost £40,000 from our generous individual donors, which represents 14% of our income. We’re setting ourselves an ambitious anniversary target by aiming to increase this amount to £50,000 during 2019. Please support us at nmcrec.co.uk/nmc30

What do you see as the priorities for the future?

Building the inclusivity of our releases, developing Debut Discs and expanding our education work. There is also a priority for me as Executive Director to ensure sound financial planning for the future – not an area without challenges – and we are seeking to expand our work with third party material, fundraising for a new area of activity which will enable us to broaden the range of music available through NMC’s trusted distribution channels, test new digital methods of dissemination, and develop audiences for new music.

This is really hard – I could maybe have done a shortlist of 30! I’ll pick three which are of personal significance to me:

NMC D064 BRIAN ELIAS: FIVE SONGS TO POEMS BY IRINA RATUSHINSKAYA
I heard these performed at the Proms in 1991 and was blown away by the sheer force and beauty of Elias’s stunning settings of these incredible poems, by exiled Russian author Irina Ratushinskaya. I was thrilled to discover NMC had released them in 2000, a few years before I joined the label when I would probably have put them at the top of my ‘wish list’!

NMC D106 JUDITH WEIR: BLOND ECKBERT
I released this on Collins Classics in 1994 but it disappeared from the catalogue when the label was closed in 1999. I was delighted that we were able to revive it on NMC, one of many re-releases of significant recordings from a wide range of other labels we have enabled, to much acclaim. I’m a great admirer of Weir’s work, evocative and brilliantly crafted, and we are fortunate to have a number of albums, including her operas, on NMC.

NMC D224 HUW WATKINS: SYMPHONY
I’m very proud of our artistic relationship with the wonderful Hallé Orchestra, with whom I have a long personal association. We spent many years planning an album of Huw’s orchestral works; originally envisaged to be of concerti only, we were incredibly fortunate when Hallé commissioned this fantastic new work Symphony and made this superb recording.

And which one would you save if the waves threatened to wash them away?

I’m going to duck that question completely and say that instead, I’d ensure I had an Annual Subscription to hand, so I could enjoy the wealth of releases in the coming year (how’s that for diplomacy and a sales pitch!)  www.nmcrec.co.uk/annual-subscription

To find out more about NMC: