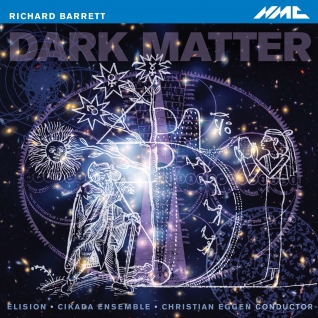 If you like your music cerebral and challenging then you should check-out Richard Barrett’s bewitching new CD Dark Matter. It features the ensembles ELISION and CIKADA conducted by Christian Eggen with mezzo-soprano Deborah Kayser, Carl Rosman on clarinets and Dary Buckley on electric guitar. The work is a profound rumination on the nature of being, ‘a response to the current state of scientific knowledge and speculation about the nature of the universe and of human consciousness’. It sets some of the oldest religious texts in existence, including the ancient Egyptian creation myth The Empire of Lights, whose striking opening eerily (or not, I suppose, since many creation myths share a common origin) evokes Genesis. There is, as the composer points out, no consolatory message in the work: no answers, only questions. In this way the work represents the nature of existence itself.

The musical language evokes Varese, Stockhausen and others, but also has a kind of paired down asceticism that reminded me of Britten’s Curlew River. It is, as the composer admits in an interview with with Daryl Buckley, a ‘rather forbidding landscape without signposts’.  This is, however, part of its ruminatory message. For those interested in the interface between visual art and music, you’ll also want to have a look at the performance of the work as an extraordinary installation with artist  Per Inge Bjørlo, partly available (it is interspersed with interviews) on YouTube.

The rest of the month’s releases

Naxos has released a five-disc set entitled American Spirit that focuses on some of the defining moments of its decade-long American Classics project. It includes music by Charles Ives, Peter Boyer, Hannibal Lokumbe, Virgil Thompson and many others. They have also released a disc of Asian Music played by the New Zealand String Quartet. It contains Long Zhou’s Song of the Ch’in, Chinary Ung’s Spiral III, Ping Gao’s Bright Light and Cloud Shadows, Toru Takemitsu’s A Way a Lone and Tan Dun’s 8 Colors. There are three new discs featuring the major ballet music of  Stravinsky, all performed by the Seattle Symphony Orchestra under Schwartz: The Firebird, Petrushka and The Rite of Spring; and a new recording of Wolfgang Rihm’s complete music for violin and piano with Tianwa Yang (violin) and Nicholas Rimmer (piano). Finally on Naxos, the Maxwell Davies symphony project continues with the composer conducting a performance of Symphony No. 6, Time and the Raven and an Orkney Wedding with Sunrise, with the Royal Philharmonic Orchestra.

On Nonsuch there is a new Blu-ray and DVD release of John Adams’ Nixon in China, featuring Peter Sellars’ Metropolitan Opera production that was broadcast around the world in cinemas as part of The Met: Live in HD on February 12th, 2011. They have also released Jonny Greenwood’s soundtrack for the film The Master. I became a Greenwood fan after hearing his fabulous score for There Will Be Blood. This one, though interspersed by performances by Ella Fitzgerald, Jo Stafford and Helen Forrest, is no less worth checking out.