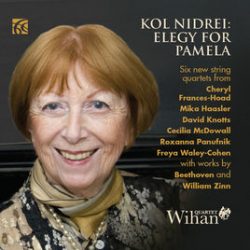 On Nimbus Kol Nidrei: Elegy for Pamela contains string quartets commissioned to celebrate the life of chamber music educator Pamela Majaro. It opens with the Cavatina from Beethoven’s String Quartet No. 13 and is followed by works from Cheryl Frances-Hoad, Mika Haasler, Cecilia McDowall, Roxanna Panufnik, Freya Waley-Cohen, David Knotts and William Zinn. The composers were chosen by the Majaro’s husband, a fact one can sense from the similarity of musical language within the commissioned pieces. This is not at all to criticise; the works are exquisitely well made, their tonal language entirely appropriate for the elegiac nature of the brief.

Also on Nimbus, pianist Andrew Matthews-Owen releases Halo, his first disk of contemporary music written for his instrument. Three composers are represented: Joseph Phibbs, Dobrinka Tabakova and Hannah Kendall.  There is a bit more range of style on offer here, from the nocturnally muscular writing in Kendall’s On the Chequer’d Field Array to Dobrika Tabakova’s colourful  Modétudes, which effectively explore the harmonic/melodic possibilities of the old church modes.

Wergo seems to have had an unusually fruitful month of releases, with 7 new albums on offer. These are Mimetics, a collection of piano works by Mauricio Kagel; organ music by Toshio Hosokawa and John Cage; a collection of songs by Wilhelm Killmayer; three works for various large instrumental/vocal groups by Hans Zender; another album including music by Cage, this time his Chess Pieces and Four Dances paired with Tom Johnson’s Rational Melodies; a collection of works by Georg Friedrich Haas, Evan Johnson and Jani Christou that ‘deal with emotional or audible silence’; and a new portrait CD of American-Norwegian composer Evan Gardner.

Naxos have released recordings of Terry Riley’s The Palmian Chord Ryddle for electric violin and orchestra and At the Royal Majestic for organ and orchestra; songs by Daron Hagen; and Timothy Hamilton’s Requiem, which was commissioned in 2012 to mark the centenary of the First World War. Not contemporary, but also worth checking out is their world premiere recording of Shostakovich’s original score from the 1955 film The Gadfly, as reconstructed by conductor Mark Fitz-Gerald.

A few other random choices that might interest: back on Nimbus is a generous programme of eight works by Augusta Read Thomas, ranging from small scale chamber music to Ritual Incantations, a work for cello and orchestra; NMC have released a collection works by three young composers—Lisa Illean, Gareth Moorcraft and Donghoon Shin—that participated in the Philharmonia Composers’ Academy (see video below); and, perhaps most sonorously, is Divine Art Records’ new recording of Andreas Willscher’s Organ Symphonies 19 & 20.