Objects at an Exhibition 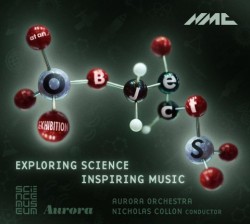 As planned, I tuned in for the broadcast première of Max Richter’s Sleep on Saturday. I’d initially thought that the 8 hour work, which is designed to be slept through, was a peculiar idea. Why would a composer want his audience to be unconscious? And if you really wanted to influence a person’s sleep, shouldn’t the music be a little less restful?  I was wrong;  I experienced extremely vivid dreams in which sound was a constant feature, the experience being both fascinating and a little disturbing. It was an interesting experiment, worth checking out.

If you are looking for something less somnolent, check out Objects at an Exhibition, a splendid collaboration between the Science Museum and NMC in which six composers took an exhibit as the starting point for a new work, the whole being a homage to Mussorgsky’s Pictures at an Exhibition.

Thea Musgrave’s Power Play takes its inspiration from the steam engines of the Energy Hall, the result being charmingly ‘technical’ work with a good deal of Stravinskian neoclassical wit. The statue of R.J. Mitchell, the designer of the Spitfire, is the starting point of Christopher Mayo’s Supermarine, a grungy piece for cello, double bass and sampled aircraft engines. Claudia Molitor’s 2TwoLO takes its name from first BBC transmitter. It begins with BBC archive recordings explaining some key facts about early days of radio broadcasting – the surprising fact that music was not initially permitted to be broadcast, an account of an early recording session and an early broadcast schedule – whilst the music, perhaps reflecting its gradual acceptance in the new medium, atmospherically creeps, bumps and scrapes into existence, gradually taking on a more solid form. David Sawer’s exciting Coachman Chronos, flies along with the energy of the historic York Mail Coach, though not without periods of thoughtful repose. Gerald Barry’s melancholic The One-Armed Pianist is inspired by a false limb designed to allow the left arm of an injured pianist to play octaves. In it a simple two note figure is gradually expanded until the octave is reached, and then insisted upon with sad significance.

Barry Guy’s Mr. Babbage is Coming to Dinner, an improvisatory work full of keenly imagined and felicitous instrumental timbres, completes what is a very satisfying programme – the works are wonderfully varied and one can easily imagine how effective they would be in situ. This project, one must remember, is just one of many – some collaborative, some solo – from NMC over the last few years. These include 20×12, New Music Biennial Project, Music Map, Digital Discoveries and Next Wave. When it comes to supporting and promoting British contemporary music, no other record label comes close.