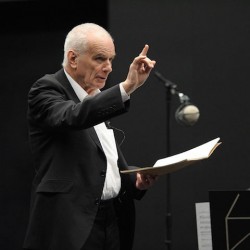 Sir Peter Maxwell Davies was one of a handful of composers truly to have dominated British cultural life, also winning a worldwide reputation with his substantial body of work. Sometimes called by his full name, sometimes Maxwell Davies or Sir Peter, he was just as often known affectionately by fellow musicians as Max.

His life can seem contradictory. He was the enfant terrible who wrote educational works for children; the ardent republican that liked the Queen; a pervasive cultural figure who lived in remote Orkney. In many respects one could say that he trod the typical artistic path—the outsider who was eventually absorbed into the establishment. It would be fair to say, however, that his assimilation did not dull his radical roots or his ability to stand up for what he thought was right. This was apparent when in 1993 the Arts Council proposed to remove funding from two London Orchestras. He threatened to renounce his knighthood and quit the country.

His ability to adapt his style to a compositional brief, writing educational works for children and other light pieces such as Farewell to Stromness (which made him one of the few contemporary composers represented in the Classic FM Hall of Fame), puts him in the tradition of community-rooted British composers such as Benjamin Britten or the present Master of the Queen’s Music, Judith Weir.

This image stands in apparent contrast with the radical composer that emerged in the 1960s, the heir-apparent to such figures as Ligeti, Lutosławski, Berio and Xenakis. During that time he wrote a number of technically challenging and provocatively political or anti-religious works that earned him the reputation as a being ‘difficult’. First Fantasia on an In Nomine of John Taverner (1962), for example, had to be conducted by the composer at the BBC Proms because Sir Malcom Sargent found it too demanding, whilst the first performances of Eight Songs for a Mad King and Worldes Bliss (both 1969) provoked catcalls and, in the case of the latter, an audience walk-out. His compositional range and ability to adapt a variety styles to his own ends was, in fact, always an intrinsic part of his musical personality.

Following his studies in Manchester, where he became associated with composers Harrison Birtwistle and Alexander Goehr, pianist John Ogden and trumpeter and conductor Elgar Howarth, Maxwell Davies became a teacher at Cirencester Grammar School in 1959, composing works such as O Magnum Mysterium and the Five Klee Pictures, for the pupils there. This interest in composing for amateurs remained with him for the rest of his life. It would manifest itself in works written specifically for children, such as the music-theatre works from 1989–91; in collaboration with them, as in the Strathclyde Concertos; or in his ability otherwise to moderate his style to accommodate an audience, as in An Orkney Wedding, with Sunrise (1985).

This is not, of course, to undermine the significant and serious contribution Maxwell Davies made to almost every form of contemporary classical music. The foundation of his style was laid in the 50s and 60s. In his earliest acknowledged work, the Trumpet Sonata Op.1 (1955), he experimented with strict forms of serialism. Though his approach subsequently loosened, there always remained a strong tendency towards numerical compositional pre-planning, most obviously in his use of magic squares. At the same time strong modal/tonal elements endured, though the extent to which they operated in the foreground tended to be in proportion to the commission in hand. He used found material, especially from Renaissance composers, for example in his Alma redemptoris mater (1957), also adopting the techniques of the period to his own ends, as in Prolation (1958) where, he observed, they are ‘carried to manic extremes.’ Twentieth-century popular forms also appear, sometimes giving the impression of polystylism. Obvious examples being his use of foxtrots in St Thomas Wake (1969) and Missa Super L’Homme Armé (1971), in both cases allowing him simultaneously to tweak the nose of religion, a favourite target.

Davies’s first opera, Taverner (1962–8), took as it theme the life of the English Renaissance composer, also using his In Nomine theme as a compositional motive. This melody was to recur in many other works, including his chamber opera The Martyrdom of St. Magnus (1976). His other operas include The Doctor of Myddfai (1996), Resurrection (first begun 1963 but not finished until 1987) and The Lighthouse (1980). This last opera, a claustrophobic psychological drama based upon a true story, is probably also his best-known.

Davies’s move to Orkney in the 1970s coincided with a relaxation in his style. In a sign of his increased separation from the European avant garde it also led to a preoccupation with traditional symphonic music. The most substantial contributions were his 10 symphonies, the first in 1976, the last completed as he received treatment for leukaemia in 2014. There were also ten Strathclyde Concertos written for the Scottish Chamber Orchestra, concertos for violin, piano, trumpet and horn and three concert overtures. Between 2002–7 he wrote 10 string quartets, commissioned by Klaus Heymann of Naxos Records.

In 1977 Maxwell Davies founded the St. Magnus Festival, remaining artistic director until 1986. As well as premiering many new works it remains heavily involved in outreach and educational work, most significantly in its composition course, now among the UK’s most important pilgrimages for ambitious composers.

Maxwell Davies received many honours during his lifetime. He was appointed a CBE in 1981, knighted in 1987 and was awarded the Companion of Honour in 2014. In 2004 he was also appointed, for a ten-year tenure, Master of the Queen’s Music. He received the Royal Philharmonic Society Gold Medal in February 2016.

Peter Maxwell Davies’s Second Piano Sonata will be premiered on 27th April; his children’s opera, The Hogboon, on 26th June.