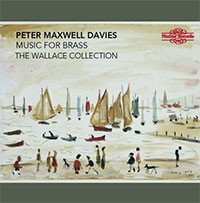 From his exuberant Opus 1, the Sonata for Solo Trumpet written for Elgar Howarth, music for brass has been an important part of the Maxwell Davies catalogue. This disk provides a useful summary of his wide-ranging contribution to the medium.

The programme is made up of three attractive and accessible works, The Pole Star March (1981), Tallis, Four Voluntaries and Fanfare for Lowry (2000) and three that present difficult technical and aesthetic challenges: Litany for a Ruined Chapel between Sheep and Shore (1999) for solo trumpet, Sea Eagle (1982) for solo horn and his Brass Quintet (1981). The mixture of pieces provides a balanced and entertaining programme, even if I would have been tempted to separate the two works for solo instruments, which some listeners might find tiring presented one after another.

The works scored for quintet feature at the beginning, end and the middle of the programme. The Pole Star March is a short work written in Maxwell Davies’s more relaxed quasi-tonal style. It is attractively melodic, though with an air of melancholy and menace that makes the major chord with which it ends something of surprise. One could easily be forgiven for thinking that the central Tallis, Four Voluntaries were not by a twentieth century composer, since they are written as a pastiche of renaissance counterpoint. They are, nevertheless, ravishing. The three movement Brass Quintet, on the other hand, is an entirely different beast. In its densely argued 35-minute span, Davies pulls no punches, his explicit aim being to create a work of a similar level of aesthetic seriousness as a string quartet. In this he succeeds magnificently. It is a gripping piece, the classically derived forms teeming with brooding energy and inventiveness.

The remaining three pieces are for smaller forces. Fanfare for Lowry, is a little work named after the Heritage Arts Centre in Salford near where Maxwell Davies was born. For much of its elegantly tuneful span it shares the a similar sound world as the Tallis, Four Voluntaries, though there is a more pungent section towards the end. The two works for solo instruments again bring us to the technical extremes of Davies’s style, not to mention those of the instruments for which they are written. The title Litany for a Ruined Chapel between Sheep refers to a building near Davies’s home on the Holms of Ire, Sanday. In it he envisages the trumpet ‘being played in the ruin, open to the skies, in the vast stillness of that haunted land and seascape.’ It is easy, indeed, to imagine this atmospheric piece in situ – it contrasts anguished expressivity with orgiastic passagework, seeming to suggest an ab antiquo religious rite. Sea Eagle, is named after a bird that was reintroduced to Britain having been hunted to extinction. Again there is more than a little of the pictorial about it, the horn swooping and soaring over an extravagantly wide tessitura.

Anyone who has even a fleeting experience of playing a brass instrument will understand that the performances on this disk are astonishing in their virtuosity. This is not to say that they are flawless, but I wonder if that would even be possible given the fearsome technical demands made upon the players. The Wallace Collective have a long association with Peter Maxwell Davies (he was, indeed, present at the recording) and their consummate musicianship is everywhere apparent. As advocates of this repertoire it makes them hard to beat.