Recording of the Month: Wunderkammer(konzert) 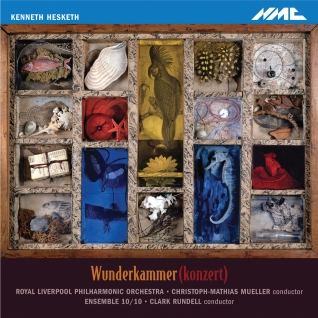 Even given that I am no expert on the music of Kenneth Hesketh, my reaction on listening to Wunderkammer(konzert), the first album dedicated to his music was: ‘long overdue’. It seems curious that music of such obvious quality is not more widely recorded.

The disc, just released on NMC, contains three orchestral works –  A Rhyme for the Season, Graven Image and At God Speeded Summer’s End – and two for large ensemble – Ein Lichtspiel for 17 players and Wunderkammer(konzert) for 13 players. The performing forces, the Royal Liverpool Philharmonic and Ensemble 10/10 (which is formed from the orchestra) reflect Hesketh’s Liverpudlian roots.

As a boy Hesketh sang at the cavernous Liverpool Anglican Cathedral. He has since remarked that the qualities of that building – especially its huge acoustic – led to his music being similarly bathed in a ‘generous sustained resonance’. This quality is everywhere apparent here. Musical figures drift and dart in and out of focus in dense and intoxicating textures, forming a disparate and yet somehow unified musical line. This is evident especially in the rich orchestral textures of At God Speeded Summer’s End or A Rhyme for the Season. This fondness for orchestral colour also owes something to Hesketh’s love of turn of the century Franco-Russian composers, a trait he shares with Oliver Knussen, whose Flourish for Fireworks may perhaps have have been a model for the arresting concert-opener A Rhyme for the Season.

As with Knussen, colourful and exuberant textures are, happily, channelled with clear-headed precision. Sometimes there are obvious structural markers, as in the return of the low percussion at the end of Ein Lichtspiel. Often, however, Hesketh impishly seems to prefer to keep the musical argument out of easy reach, and in doing so succeeds in making the ride all the more intriguing. Even where this is the case, though, there is always a sense of purpose, of pitch hierarchies being established and of material being worked through and developed.

There are many extra-musical associations to take in – the poetry of Dylan Thomas, Bauhaus period cinema, Cartesian philosophy, automata, medieval memento mori. One can choose to ignore them, of course, but they provide useful points of entry to the music and into a fascinating creative mind.

The recording and performance are excellent, the sleeve notes – which include a biographical note by Paul Griffiths – generous and informative. As with all NMC disks, the full recording is available on Spotify. There are also excerpts available on the NMC website. Highly recommended.

EMI has just released a new recording of Britten’s oft-maligned The Rape of Lucrecia. Its sparse sound world – more reminiscent of later works such as Curlew River – means it is unlikely ever to win the popularity of the opera it followed, Peter Grimes. The Aldeburgh Festival Ensemble and a marvellous group of singers under the sympathetic direction of Oliver Knussen make, however, a persuasive case for reappraisal.

Naxos’s survey of the music of Peter Maxwell Davies continues with new recordings of his Piccolo Concerto, Trumpet Concerto, Maxwell’s Reel, with Northern Lights and Klee Pictures. As with other discs in the series, these are conducted by the composer. Also on Naxos is a new programme of music by Alexander Goehr played by the London Sinfonietta under Oliver Knussen. It contains: When Adam Fell, Pastorals and Marching to Carcassonne.

Two recordings, finally, to watch out for. Previewed on NMC is a disc of music for voice and string quartet by Belfast-born composer Deirdre Gribbon. It will include her substantial works Island People and Crossing the Sea. The official release date is 11th March, though you can already listen to extracts on the NMC website. Deutsche Grammophon, on the other hand, are currently trailing a new disc entitled Pocket Symphonies  by Sven Helbig. Slated for release on 22nd February, you can sample one track on Soundcloud, here.