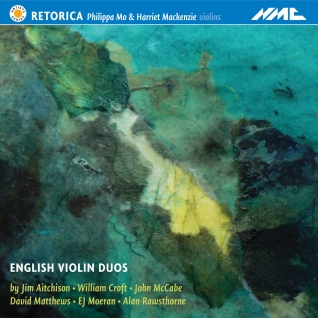 If a programme of music for two violins does not sound like a very appealing prospect, Retorica’s debut disk, just released on NMC, might change your mind. Violinists Harriet Mackenzie and Philippa Mo have made it something of a mission to bring this little-known repertoire to a wider audience. Even the name of their duo – the Italian feminine form of the word rhetoric – is a reflection of this: just as rhetoric could be said to be artful persuasion in speech, they seek to do the same through their playing. They succeed here by the oratorical bucket-load.

The all-English programme consists of: Jim Aithison’s Syruw: Five Kazakh Tableaux, John McCabe’s Spielend, Moeran’s Sonata for two violins, William Croft’s Sonata IV Op. 3 No. 4, David Matthews’ Eight Duos, and Alan Rawsthorne’s Theme and Variations. It is a well thought-out programme; many of the pieces have a distinct feeling of place, especially by their link to the English pastoral tradition (or in some cases their reaction against it). The Croft, placed mid-programme, in itself a lovely piece, also acts as a clever amuse oreilles before we return to the twentieth-century for the last two works. It also ends with the same lilting rhythms with which the Matthews begins, providing a nice sense of connectivity.

There is a strong pictorial element in many of these works, none more than the first on the disk, Jim Aitchison’s Syruw. The composer has long forged connections with the art world, and this piece was designed to be performed with an exhibition that explored Kazakh life and textiles. It consists of a series of delightful and expertly-realised vignettes, from the stillness of the opening, whose little disturbances presage the gentle breeze of the second movement through to ‘an exaggerated tale’, which seems capture a storyteller in the very act. The Matthews has a similarly visual feel. There is a sense of connectedness between some of the movements, especially in the emphasis on the pastoral and, in the sixth movement entitled ‘Contra-Pastoral’, its urban equivalent. The whole can also, however, be understood as a series of hors d’oeuvres-like ‘moments’, each element entire unto itself, but much more satisfying when consumed together.

The other three twentieth-century works on the disk use more abstract structures. In the case of the Rawsthorne this is a closely argued theme and variations, though the emphasis on short movements provides a not dissimilar feeling to the Aitchison and Matthews. There is no doubting the fact, however, that this was intended as a much more serious work, the theme of the opening being skilfully and inventively manipulated throughout, with the final movement recapitulating some of the early variations in order to bring the piece to a satisfyingly cogent close. Spielend, the German word for ‘playing’, by John McCabe is based upon the idea of the musicians ‘playing their themes against each other and playing with the musical material.’ The thirteen-minute, single-movement work, begins with exhilaratingly spirited hocketing interspersed with flourishes. It is followed by a long central section that explores two reminiscences of the Violin Sonata of Poulenc before returning to the vigour of the opening.  Moeran’s Sonata for Two Violins is the most traditional of the twentieth-century works on the disk. The influence of English folksong is everywhere imprinted on the music, though his frequent diversions into more adventurous harmonic territory avoids the ‘cow-pat’ element of which many of his contemporaries were guilty. This is especially evident in the final movement in which, after 12 straightforward passacaglia statements, the music is allowed to roam more freely.

What is especially striking about the pieces on this disk is that, perhaps because the limited resources force the composers to make every note count, each has a structural tautness that facilitates rapid engagement with the listener. This is not to say the composers give away everything too quickly; far from it, this is music that challenges and rewards repeated hearings. The other extraordinary quality of these works is the way in which each composer has made limited resources sound rich and even symphonic. In this they are aided by the brilliant performances of Mackenzie and Mo. It is clear that they not only understand the subtleties of the music they are playing but they want to ‘wow’ you into loving it as much as they do. In this they totally succeed. The recording too strikes an excellent balance: it is both intimate but with sufficient acoustic spaciousness for the music to feel full.