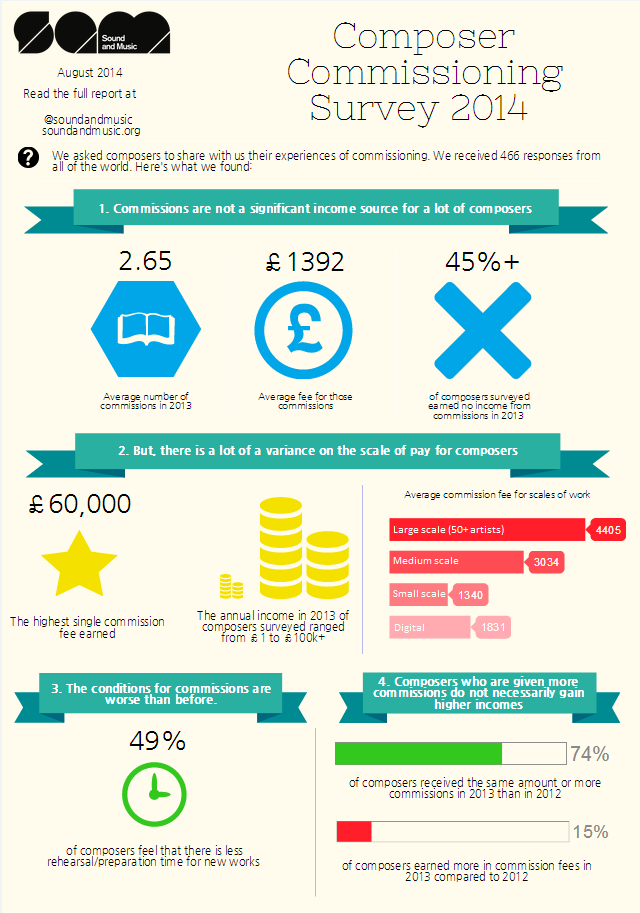 I suppose as a composer I should be filled with self-righteous anger after reading the report. The bottom line is that most composers receive very few commissions, get paid very little and feel that there is not sufficient time given to the preparation of their works. Why then do I find myself encouraged by it?

Composing is art, not a job in the normal sense. At the highest level it is the production of a thing of beauty that has something new and vital to say and is a true reflection of the person writing it. If you are going to submit yourself to these lofty ideals, you’re probably going to wind up poor. Let’s face it: most serious artists, sculptors, novelists and poets are in a similar position.

Given this, I find it gratifying that, for some composers, it is very lucrative indeed. At least one in the survey earned over £100,000 in commission fees. Another made £60,000 from a single commission. Let’s also not forget that this does not include money earned from performances, broadcast rights, sheet music and record sales. Composing can be a viable career, even if the sums at the top end do not rival those found in the world of, say, the visual arts.

Much of the commentary accompanying the survey outlined the difficulties composers encounter when learning their craft. SaM’s chief executive, Susanna Eastburn wrote in the Guardian, for example, about the ‘heroic commitment to become a composer if you’re from a working class background.’ I think she’s right about this, though not necessarily for the reasons she describes. The worst outrage inflicted upon music education has been the destruction of free instrumental tuition. This is a national scandal that affects all music making, not just composing.

In other respects our education system works rather well for composers. Foreign musicians I speak to are always astounded that our school music curriculum includes composing from an early age. It is now possible (though I would argue not ideal) for a pupil to become a composer only through study in the state-funded classroom. Higher education costs do seem prohibitive, but no more so than in other subjects. We also forget that degree fees only have to be paid back once a certain income level is attained, and then on a sliding scale.  As for postgraduate level, for the talented there are sources of funding that can be accessed through individual institutions and AHRC.

Eastburn also observes that  ‘Composers either need private or other sources of income – usually teaching, performing or conducting, all of which require a whole new set of skills, training, time and energy.’ As if composers have never done this before! Thinking back through the canon of music history’s most venerable composers it would probably be quicker to make a list of those who didn’t have a significant other job. Most composers played, conducted, taught or did a combination of the three. Some, such as Ives, did something entirely different. Perhaps, like the career politicians we love to criticize, composers should have other interests.

Of course I’d like composers to be paid more. I’d like there to be more commissions and more rehearsal time when a piece is played. I wish my every creative utterance were showered with gold. It’s a competitive world, however, and, beyond the ludicrous idea of composers receiving a salary, I can’t imagine easy solutions. There will always be composers struggling at the bottom, just as there are struggling sportsmen, writers, artists and actors. In common with all of those professions the cruel reality is that the act of merely doing the thing is worthless: kicking a football, writing a poem, painting a picture or composing music is of no intrinsic value in and of itself. For that reason the world is hard on us. We have to prove that what we do is worth it. Is that really so bad?