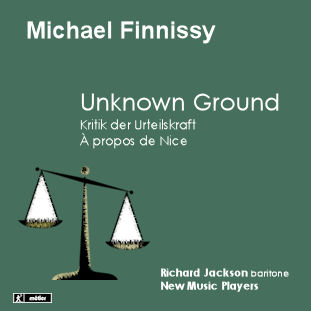 I often write about Naxos and, more obviously (it’s dedicated to contemporary music, after all), NMC in these roundups. Métier, now absorbed by Divine Art Recordings Group, is another label that is a treasure trove for new music lovers. Their most recent contemporary music releases are: Michael Finnissy’s Unknown Ground, James Weeks’ TIDE and Carson Cooman’s Rising at Dawn. I have listened to the first two of these.

I met Michael Finnissy at an event dedicated to his music at Cardiff University several years ago. He gave a talk to us that was quite unlike those that other visitors had given: it was often personal, sometimes bitter, but above all fascinating, revealing and inspiring. The concert that evening was unforgettable, especially for the chance to hear live his innocuous sounding English Country Tunes for solo piano, at the end of which the pianist is almost crucified on the keyboard with each hand playing virtuosically at extreme ranges. What was interesting from the other works in the concert, however, was that Finnissy’s music moves within a range: not everything is hard and angry. That is very much true of Metier’s new disc in their series dedicated to the composer.

It contains three première recordings: Kritik der Urteilskraft, Unknown Ground and A propos de Nice. Kritik de Urteilskraft is all restraint and fabulously beautiful long textures before opening out into more Webernesque pointillism. This never, however, entirely gives way to Finsissy’s preference for expressive melody. Unknown Ground is a moving setting of the words of various Aids sufferers. It is simply set, the emphasis always on the text, an approach that reinforces its emotionally charged content. A propos de Nice provides an often-jaunty contrast to the other two pieces, though it is interspersed with more contemplative passages that recall Kritik de Urteilskraft. The language everywhere is uncompromising, in spite of the occasional glimpses of English pastoralism. It is not easy music to get to know, but it is worth the effort. For those unfamiliar with his language, the disc is a good place to start.

James Weeks’s TIDE, is actually a melding together of three works, a ‘composite’ composition. These are Burnham Air for solo oboe d’amore, Tide (lower case) for solo cello and Sky for solo clarinet. These are presented apart on the second disc in the collection, together – not exactly at the same time since they are all different lengths – on the first.

Heard alone, Sky is a work of transcendental calm, the clarinet playing in lugubrious long counterpoints with a six-track recording of itself. The slightest event takes on enormous significance, the sound of the player’s breath, the beating sounds created by detuning. Burnham Air, by contrast, is a plaintive work of curling scales and arpeggios, key-rattles and wailing detuning. It works its way into a strangely passive but extremely unsettling frenzy. Tide sits in between the feverish machinations of Burnham Air and the cosmic breadth of Sky. It is, perhaps, the least interesting of the three when played alone; the ceaseless glissandi and droning feel a little unvaried.

The gradual unfolding of these three planes in the composite work TIDE feels almost mystical in its inevitability, the whole becoming greater than the already substantial sum of its parts. Especially striking, when the planes start to interact, are the spectral effects created by the shifts in tuning. It feels like Weeks is playing with the waveform essence of music, manipulating things at their very root. The result is music that feels original but in some way also primeval. There is a lot going on, and I can’t pretend to understand it all, let alone describe it in words. I recommend taking half an hour to make up your own mind, especially if you have Spotify, where Métier release all their recordings.

Naxos has four new albums of contemporary music on offer. The first contains John Rutter’s Suite Antique, Philip Glass’s Concerto for Harpsichord and Chamber Orchestra and Jean Françaix’s Concerto pour Clavecin et Ensemble Instrumental. In the American Classics series there is a recording of John Knowles Paine’s As You Like It Overture, The Tempest and Symphony No. 1. The Maxwell Davies series also continues with Strathclyde Concertos Nos 5 (for violin and viola) and 6 (for flute). The last consists of world première recordings of John Corigliano’s Conjurer, a concerto for percussion and strings, and Vocalise for soprano and electronics.