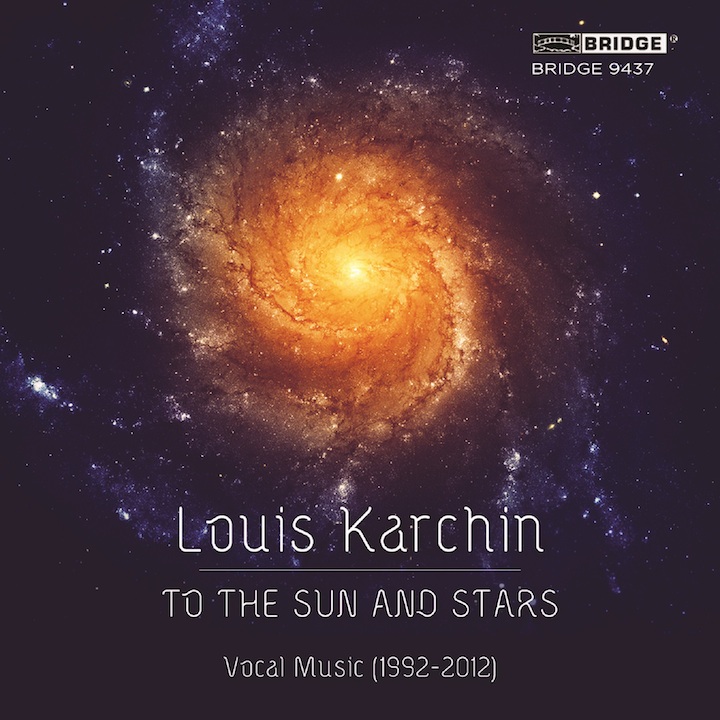 To the Sun and Stars is a new album on Bridge of vocal music by Louis Karchin. The works – American Visions, To the Sun, To the Stars, The Gods of Winter, and ‘A Way Separate…’ – were written between 1992 and 2012, so provide a good cross-section of his style: dissonant, rhythmic and angular. This might sound forbidding except that he also does not eschew overt, even lush, tonal references as, for example, at the arresting major-chord declamation of ‘Who are you, Grand Canyon?’ a third of the way through the first movement of American Visions. Karchin is normally labelled a modernist, but such gestures give his music more flexibility and variety than perhaps the term suggests. This disc also demonstrates a gift for vocal writing; the texts set with great clarity and expressivity, the unobtrusive accompaniment supporting, colouring and commenting. Performances are rock-solid under the direction of the composer, the cast of singers impressive. The album is available on Spotify. Worth exploring.

The latest disk in the Naxos rereleases of the Collins Classics’ Maxwell Davies back-catalogue contains two symphonic works from the seventies: Black Pentecost (1979) ‘a plead against environmental destruction’ and Stone Litany (1973), an evocation of a Neolithic burial site. Other Naxos releases include: Life Sketches—five piano works by Nils Vigeland played by Jenny Q Chai; Volume 2 of the Toshio Hosokawa series of orchestral works, containing Woven Dreams, Blossoming II and Circulating Ocean; and Lancino’s Violin Concerto and Prelude and Death of Virgil.

There are three new albums on Metier, all of which I’ve only been able to listen to the not-too-generous extracts on the website (though the complete recordings are likely soon to be released on Spotify). There is a disk of Christopher Wright’s quirkily tonal chamber music; Eric Craven’s angular-sounding–the extract provided reminded me a great deal of Fém from Ligeti’s Etudes–Piano Sonatas 7, 8 and 9; and Michael Finnissy’s sardonically humorous Mississippi Hornpipes for Violin and Piano.

Two last recordings worth considering. In addition to the Karchin disk with which I started, Bridge records this have also releasedStephen Douglas Burton’s Symphony No. 2 Ariel with mezzo-soprano Diane Curry, baritone Stephen Dickson and the Syracuse Symphony Orchestra conducted by Christopher Keene. On Signum Classics, finally, is a new album of choral music by Gabriel jackson performed by the BBC Singers with whom he is Associate Composer. The disc, available on Spotify, contains his seven movement Airplane Cantata and four movement Choral Symphony as well as three shorter (though not insubstantial) works The Voice of the Bard, Ruchill Linn and Winter Heavens.