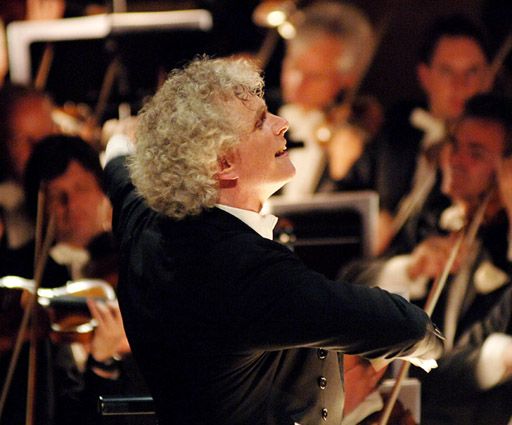 September sees the return of Simon Rattle to London as LSO Music Director, an event that will be celebrated with a series of Barbican concerts that have contemporary music front and centre. Things kick off on 14th with a concert featuring composers associated with the conductor: Oliver Knussen, Harrison Birtwistle, Thomas Adès and, with a new piece that will open the concert, Helen Grime. Each of these featured composers then will curate their own concert as part of the celebration: Knussen on 16th, Adès on 18th, Grime on 20th and Birtwistle on 23rd. The repertoire on offer in these is pretty interesting, from Machaut and Byrd to Madness, Maw and Matthews.

September marks the end of the Proms season, the last night premiere this year being Lotta Wennäkoski’s, Flounce on 9th. For those looking for something after this, there is the North Wales International Music Festival on 16th. Living composer represented include Rhian Samuel, Edward Gregson, Gavin Higgins, Robat Arwyn, Paul Mealor and Oliver Tarney. There will also be music by the festival’s founder, William Mathias on 24th and 30th.

Overlapping with the end of the Proms season is the Ultima Festival in Oslo (7th–16th). It is Norway’s biggest festival for contemporary music, making use of a number of big and small venues within the capital. The festival opens with a concert performance of Heiner Goebbels’ Eislermaterial, a tribute to one of his great musical heroes, Hanns Eisler. Other highlights include a new installation Rats–Secret Soundscpres of the City by Jana Winderen from 6th–14th; Ballerina, a new chamber opera by Synne Skouen on 8th; and a multimedia theatre work Adventures in space and time by Norwegian performance group Verdensteatret from 8th–17th. The full programme is available, here.

Warsaw Autumn (14th–24th) is likewise Poland’s most important contemporary music festival, this year celebrating its 60th season. The theme is the ‘troubled’ avant garde. It will explore artistic issues as they were at the time of the first Warsaw Autumns and as they are today, strands including ‘the phenomenon of sonorism, the orchestra, the string quartet, song, instrumental theatre, electronics, and multimedia.’ Composers whose music appeared at the first festivals—Tadeusz Baird, Wojciech Kilar, Andrzej Dobrowolski, Krzysztof Penderecki, Bogusław Schaeffer, Luigi Nono, Isang Yun—will be performed at this year’s festival. These will be contrasted with works by younger and middle generation composers such as Pierre Jodlowski, Tadeusz Wielecki, Christophe Bertrand, Alexander Schubert, Brigitta Muntendorf, Johannes Kreidler, and Artur Zagajewski. The opening concert features Grisey’s Le noir de l’étoile, Georg Friedrich Haas’s Dark Dreams, as well as Tansy Davies’s Forest and circulatio by Artur Zagajewski.

In Strasbourg Musica 2017 runs from 21st to 7th October. It opens with the French premiere of Michaël Levinas’s La Passion selon Marc, une passion après Auschwitz (see video below), a work which examines the painfully irreconcilable character of the Passion and the Holocaust. As well as established works by living or recent composers, there are a number of world premieres. These include works by Bruno Mantovanni, Andy Emler, Zad Moultaka, Amadeus Regucera, Jean-Patrick Besingrand, Jeremías Iturra, Benoît Montambault and Raphaël Cendo.