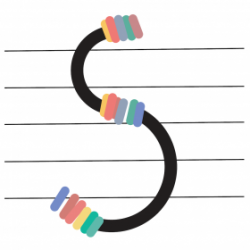 Björk’s Biophilia in 2011 was a watershed moment for me. A cross-disciplinary project that married music, artwork, games, animation and wider environmental themes, it provided a compelling demonstration of how apps might be an ideal medium for new music. It was a shame to revisit it today and to find that it has not been well cared-for in the intervening years. It now crashes like a pig.

I thought that Biophilia would be followed by a host of similar projects, hoping, indeed, that they might be musically a bit more experimental. It seems such an obvious way of introducing our iPad addicted younger generation to new music, if not in the home then certainly in school music lessons. Sadly, the anticipated avalanche never happened, probably because contemporary classical music is as devoid of cash as it is abundant in imagination.

Given this I was delighted recently to come across Sonorama by composer and artist Claudia Molitor. The app is designed to be listened to on the train from St. Pancras to Margate, with journeys between each station along the way being accompanied by readings, archive recordings and original compositions.

Whilst the app can’t approach the multimedia slickness that was Biophilia, it is, nevertheless, beautifully presented. The opening screen gives the option to learn more about the app, to browse by all content or to explore the musical journey in a map of the train route. The easiest way to navigate is by the latter method, since this gives a better sense of both the musical and physical voyage. Of course, the best way to listen is whilst actually on the train from St. Pancras to Margate (take the Southeastern Highspeed train via Ashford International, if you’re interested). Even without this, however, the material on offer is wonderfully evocative, thought provoking and, in the composed sections, gently – the music rarely insists – compelling.

As if to emphasise the cross-disciplinary nature of this work, the graphic score, a work of art in itself, is on display at Turner Contemporary until 1st November. It is also viewable in the app. There is also an accompanying book, available here. The app itself is only available on iOS, though other mobile devices can stream it from the web.