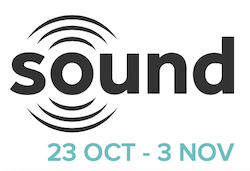 This year the festival focuses on the oboe, with leading performers and ensembles showcasing the instrument and with oboists Christopher Redgate and Nicholas Daniel as Artists-in-Residence.

Headlining the 20 world premieres and 12 new commissions are new works from Ailie Robertson, the festival’s Composer-in-Residence. The first of these, written for local singers and female singers from EXAUDI, explores themes of Motherhood. It will be performed on the opening evening.

A new work from Master of the Queen’s Music, Judith Weir, will mark the reopening of Aberdeen Art Gallery and Cowdray Hall. Called The Big Picture, the work will be performed over 3 levels of the atrium of the Art Gallery by over 90 professional and amateur singers and instrumentalists under the baton of Roger Williams on 2nd November.

Sound Festival director, Fiona Robertso said ‘Judith Weir’s work…celebrates the creativity of Aberdeen bringing together school children and amateur singers with professional instrumentalists and the singers of Con Anima. It will be a remarkable event.’

Sound Festival 2019 opens on the evening of 23 October with the commission from Ailie Robertson, the first of twenty works which will be given their world premiere at the festival.

Other highlights of the opening weekend include: Il faut qu’on parle/ We need to talk bringing together British cellist Matthew Sharp with French cellist, Noémi Boutin, giving the world premieres of works for two cellos from Frédéric Pattar (FR) and Laura Bowler (UK); Yellow Wallpaper – a programme of works responding to mental health conditions; a performance of Claudia Molitor’s Decay; and a concert by the Singh Quartet and Vessel (electronics) inspired by Janáček’s string quartet, Intimate Letters.

Sound’s Resident Ensemble Red Note makes the first of two appearances at the 2019 festival on Saturday 26 October performing works works by five Scottish composers for oboe and cello developed during a residential weekend in Aberdeenshire.

Joining the festival as Artist-in-Residence for this second weekend is Nicholas Daniel. His contribution will include a performance of Amethyst Deceiver in a concert celebrating the work of John Casken, and a concert in which he will be joined by Oliver Boekhoorn (from Calefax Wind Quinet) and Jean-Pierre Arnaud (from Ensemble TM+) in a performance of James MacMillan’s Intercession for 3 Oboes. This concert, which also features works by Thea Musgrave (Take 2 Oboes), Tansy Davies (Forgotten Game for solo oboe), Emma-Ruth Richards (De Ståmparare) Joanna Lee (Proserpina) and Alasdair Nicolson (Magnus III) is being supported by the British Double Reed Society.  Daniel will also join Sound Festival’s resident ensemble, Red Note, in the World Premiere of a new oboe concerto by Luke Styles, which has been co-commissioned by Sound.

In the Friday Late Night session Suk-Jun Kim (electronics) will present a series of electroacoustic compositions whilst the Saturday late-night event will bring together Nicholas Daniel, Matthew Barley and musicians from Calefax and ensemble TM+.

Sound Festival 2019 closes with its return to the Cowdray Hall with a concert of multi-oboe works including John Woolrich’s Array for 10 oboes led by Nicholas Daniel.