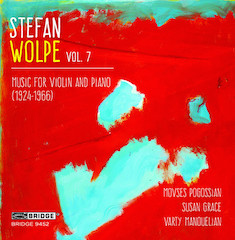 Though back in Pembrokeshire after three months at the Paul Sacher Sitting in Basel, a recent CD release brought to mind an uncomfortable event that occurred whilst I was there.

I am constantly reminded how little I know when I am at the PSS, a healthy facet of being in an environment surrounded by experts in different fields of musicology. It can, nevertheless, be quite alarming to think you have a decent grasp of twentieth century musical history only to come across a famous composer that you haven’t even heard of. Having stuck up a conversation with a very lovely musicologist I asked the standard question: ‘Who are you studying here?’ She answered ‘Stefan Wolpe’, a name, I was embarrassed to admit, that I had never come across.

He is an interesting figure (I know now), having been an actively political, left-leaning Jew in pre-war Germany, a fact that, not surprisingly, led to him fleeing the country after the Nazi ascension to power in 1933. This led to a short period studying the serial method with Webern in Austria, before fleeing again to Palestine and later to the U.S. Musically he was never as strict in his use of serialism as his teacher – he remained interested in other pitch systems, including tonality and octatonicism – and also displayed an interest in popular forms, especially jazz.

If you are new to his music a good place to start is on Bridge Records, who have just released the seventh volume of a survey of his works. This contains a selection of music written for violin solo, violin duo and violin and piano. The major work on the disk is his 1949 Sonata for Violin and piano which, written after taking U.S. citizenship, he described as ‘one of the first pieces which show my personal liberation.’ Despite this there are strong signs of his Germanic roots, especially in its uncompromising harmonic style and finely considered motivic working. Interestingly a fragment from the later Second Sonata, also on the disk, shows, if anything, a strengthening of the Germanic influence; the pointillistic style of Webern being never far away.

A dig around other releases (many of which can be found on Spotify) in the Bridge Records series reveals other facets of the composer’s style. Volume 3, for example, opens with the charming children’s puppet show tale Lazy Andy Ant, ending with the catchy Songs of the Jewish Pioneers and the fruitily tonal To a Theatre Now. Even here, however, there is more challenging fare on offer, such as Two Songs for Baritone. Such shifts of stylistic gear can make Wolpe a difficult composer to characterise, though set in the context of his experiences as a refugee – in every place he visited he absorbed something of the music – they begin to make sense.

Happily, and despite such shifts, the music remains, as far as I have heard, remarkably even in quality. And stylistic variation has its advantages: whatever you personal preferences, there is likely to be some Wolpe that you will like.