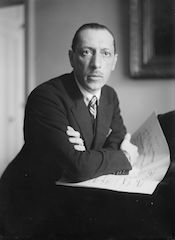 On December 2nd Valery Gergiev will give the ‘world premiere’ of Stravinky’s Funeral Song.The piece, which was performed just once before being lost, was decribed by the composer as “The best of my works before The Firebird“. It was recently rediscovered in the St. Petersburg Conservatoire. The performance will be webcast at medici.tv.

You can also hear Gergiev talking about the performance, here

A year ago, we learned that a lost work by Stravinsky had been discovered in a pile of dusty scores in the archives of the St. Petersburg Conservatoire. The work turned out to be Funeral Song (“Chant Funèbre”), a 12-minute long musical commemoration of Rimsky-Korsakov, Stravinsky’s beloved composition professor. The score disappeared soon after its one and only performance in 1909. The composer wrote in his Memoires in 1935:

Unfortunately, the score of this work disappeared during the revolution… I no longer remember the music, but I recall very well my idea for the work. It was like a procession of all the soli instruments of the orchestra, coming in turns to each leave a melody in the form of a crown on the master’s tomb, all the while with a low background of murmuring tremolos, like the vibrations of bass voices singing in a choir.

Specialists have long considered Funeral Song to be a major work by the composer. Numerous searches were organized after the fall of the Soviet Union in hope of finding the score, all without success. But then…

“Natalia, you were looking for a score by Stravinsky, was it called Chant Funèbre?”

Like her professors before her, musicologist Natalia Braginskaya had long held on to the hope of finding the precious document when one day, she received a call from Irina Sidorenko, the librarian of the St. Petersburg Conservatoire. Funeral Song had been found! A year later, Valery Gergiev and the Mariinsky Orchestra perform the miraculously-preserved piece.