Tarik O’Regan: A Celestial Map of the Sky 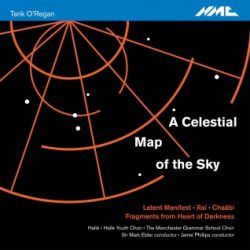 It seems ridiculous that a disk that has no overt political agenda should, as the clock ticks inexorably down to the triggering of Article 50, have acted to calm my jittery Brexit nerves. It’s not been fun being British on the continent these last few months, wondering what on earth is going to happen once we leave the EU.

There’s something unashamedly international about this disk, a tonic at a time when our politics seem much meaner. O’Regan himself was brought up in the UK, but spent a lot of time in North Africa, his mother being born in Morocco but from an Algerian family. He now lives and works in New York City. These myriad cultural influences are woven deftly into his accessible musical language.

The opening work, for example, A Celestial Map of the Sky, contains a collage of texts with a distantly international tone. One of the threads which binds the whole together is Walt Whitman’s Salut au Monde! which includes the lines:

I see the cities of the earth, and make myself at random a part of them.

I see the cities of the earth;

I am a real Parisian;
I am a habitan of Vienna, St Petersburg, Berlin, Constantinople; I am of Adelaide, Sidney, Melbourne;
I am of London, Manchester, Bristol, Edinburgh, Limerick;

That these words are performed by the fresh, and excellent, voices of The Manchester Grammar School Choir (for whom the work was written) and the Hallé Youth Choir, makes them more poignant still. Citizen of nowhere Mrs. May? Count me in.

The music itself reflects wonderfully the changing tone of the different texts. There is the mystical opening of the Gerald Manly Hopkins, the positive and exhilarating energy of the Whitman, the more tonally ambiguous and searching quality of the Mahmood Jamal. Tarik O’Reagan identifies himself as a fan of Benjamin Britten. There is certainly an element of that here in his responsiveness to the text, his facility in writing for young voices and the flexibility of his musical style. Combined with this, there are more obviously American elements—hints of minimalism, a certain stylistic unpretentiousness, an occasionally Coplandesque ‘openness’ to his orchestration—making him truly transatlantic.

The stylistic net is drawn wider still in two works: Raï and Chaâbi. Written for orchestra alone they draw upon popular North African dance forms, though the composer is quick to observe that ‘neither is an ethnographic study.’ Raï, which is Moroccan influenced, takes things a stage further with the inclusion of darbuka drums, which add a propulsive energy to the proceedings. In fact, of the two, Raï is rather the more successful, its taut rondo structure containing a plethora of well-executed ideas. Chaâbi, has a wonderfully elegiac quality, especially in the opening dialogue between soloists and orchestra. It nevertheless feels a little diffuse, and towards the end some of the ostinato patterns begin to overstay their welcome. As if to emphasise this point, the download version of the disk contains a bonus track, Now Fatal Change, for solo violin and countertenor, based on the same material as Chaâbi. It is a beautiful work, poised and focused in a way that Chaâbi can’t quite manage. It also once again highlights the Britten (this time via Purcell) influence.

J.S. Bach’s Sonata No. 3 for Solo Violin in C Major provides the inspiration for Latent Manifest, which was commissioned as part of a programme of musical transcriptions at the 2010 BBC Proms. O’Regan explains that his method of transcription is also derived from Bach, for when the composer himself adapted the violin piece for harpsichord ‘the result was more fantasia than conventional transcription.’ The same is certainly true here. The opening is a literal enough quotation, but O’Regan quickly leads us on an exhilarating reinterpretation of the original material. The brassy, and expertly prepared, peroration five minutes in had me clutching the arms of my sofa in delight.

The programme ends with Fragments from Heart of Darkness, a suite extracted from O’Regan’s chamber opera Heart of Darkness, based upon the novel by Joseph Conrad. Again that text is seems apposite for our troubled times—though seen through the prism of imperialism, the central question of how one race perceives another remains relevant. The piece, the most substantial in the programme, works in a way that opera suites don’t always manage—we are not merely presented with a bouquet of nice moments from the larger work, but a composition that contains a thrust and narrative drive of its own. It’s not unlike listening to a Strauss tone poem; it is vividly pictorial and contains a circularity (we begin and end in the same place) familiar from, say, An Alpine Symphony. In any case it provides an excellent conclusion to this splendid and highly recommended programme of music.

A Celestial Map of the Sky: Interview with Tarik O’Regan