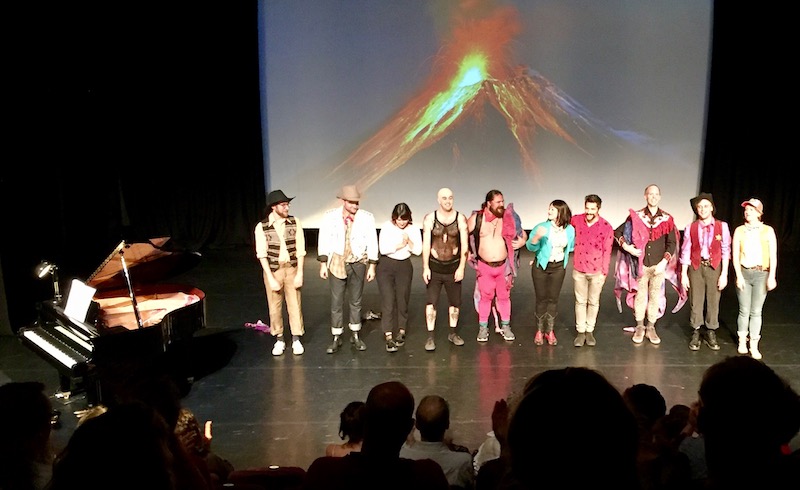 The cast of Pterodactyls of Ptexas taking a bow.

My arrival at the first night of Tête à Tête coincided with a pop-up performance of Samuel Bordoli’s Belongings, a work first performed on the Caledonian Sleeper train the night before the opening of the festival. Frustratingly, I only caught the closing bars, an experience that was almost exactly replicated on my second night, when I should have known better. If you’re planning a visit to Tête à Tête, arrive early—you never know what treats they will lay on before the official performances start.

There were three operas on the first night, beginning with Stephen Deazley’s Dr. Ferret’s Bad Medicine, a riotous and brilliantly scored youth opera. Through a sequence of morality tales it outlined the many and various ways in which children are bad. Opera North Youth Chorus excelled themselves, their lusty choral singing providing the backbone to the work, as did Whitaker Mills as Dr. Ferret, who acted as ringmaster.

Liturgie was a very pointed contrast to the exuberance of Dr. Ferret, a stylised work that had its roots in the Ballets Russes. The austere coolness of Daniel Lee Chappell’s music, aptly reminiscent, perhaps, of late Stravinsky, acted as a perfect foil to the ritualistic nature of the dance and the quite extraordinary costumes, (both recreated from the original Ballets Russes conception). The instrumental ensemble took a little while to warm up—I  wondered whether they had had much time with the score beforehand—but the singers and dancers coped admirably with the many challenges of this tricky piece.

ID, Please has already won some notoriety given that the composer Soosan Lolavar, a British-Iranian passport holder, was almost unable to attend rehearsals of the work in the US during Trump’s first ‘Muslim Ban.’ The story unfolds as a series of interrogations between a border guard and ‘two’ (for the shifting nature of their responses makes them universal) travellers. Though some of these encounters are wittily handled, all are fraught with confrontation. There is a lugubrious inevitability about the score, which unfolds from an imaginatively handled fantasy on one note. All three singers excelled themselves, especially Robert Raso, whose portrayal of the guard was both unnerving and sympathetic—one moment the angry protagonist, the next just another innocent caught in the system.

The second night began with The United Kingdom of Earth: A Brexit Opera, the piece that originally inspired me to make the long journey from Belgium to Tête à Tête. It was a horrible letdown. The premise, that at some point after leaving the EU the rest of the world is destroyed in some species of conflagration, is a promising one. We were treated, unfortunately, to something that barely rose above the level of a sixth-form play. The ‘score’, such as it was, was a poorly conceived electronic backing track turned up so loud one could barely hear what was happening on stage. A pianist added inane interjections. Apart from a genuinely funny cameo by an actor playing Boris Johnson, there was barely any singing and, when the dialogue was spoken, it was frequently read from ill-hidden scripts. The bawdiness of it all seemed relentlessly pointless and not at all sharp—we had a man masturbating at the appearance of the Queen, a dog humping a boy and a character pronouncing that he had ‘three prepubescent girls locked in a cage in the cellar.’ I guess the defence of this is that Brexit itself is amateurish, badly conceived and relentlessly dispiriting. I, however, found myself thinking that if this is best art that Brexit inspires, it is merely another tragedy to add to the mess that we are in.

A better lesson in foul-mouthedness was provided by Stephen Crowe’s Pterodactyls of Ptexas, a smart masterclass in small opera. The scenario is not particularly original, but has a nice twist: love and loss in the Wild West with added pterodactyls (because, like Crowe, we all love pterosaurs). There were no props other than several chairs, a static back projection of a volcano, one pianist and an electronic score. It’s sparse, but everything that it lacks is turned, often hilariously, into a plus. Credit to the actors/singers for this, many of the little details relied on their ability to time their actions with sound effects or simply to milk a comic situation. This they did with aplomb, at the same time coping with a score that was pretty fiendish. The best thing about the work was just how self-referential it was. The two female characters slugged it out for who was the lead, Fleur de Bray winning by the sheer prowess of her acting chops and scarily dependable coloratura. The poor Sheriff, meanwhile, was stuck with the hilarious aria: ‘who the fuck wrote this libretto, where are all my lines?’