The Homosexual Necrophiliac Duck Opera (and some August Festivals…) 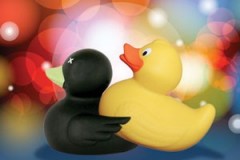 The BBC Proms got underway with, quite literally, a bang on Friday with the first night premiere of Gary Carpenter’s Dadaville, fireworks and all. I notice that the BBC appears to be separating out works on iPlayer this year, so if you want to listen only to a particular piece, you don’t have to search through the whole concert. For a complete list of Proms premieres, see my earlier blogpost, here.

The Tête à Tête Opera Festival at King’s Cross, London began yesterday, but there is still plenty of time – it runs until 9th August – to sample its many pleasures. The Festival now lays claim to be the largest of its type in the world and, given this, it is difficult to characterise in a few words. Fundamentally it is a crucible for new opera, from the serious to the silly; the prize for the latter this year going to The Homosexual Necrophiliac Duck Opera which has the the tagline ‘It’s Quakers!’ There’s also a contemporary clinic for new works with the brilliant Jane Manning on 8th August. As far as I can see, they are still accepting applications. If you can’t get to London, Tête à Tête also post videos of most of the operas on their website.

The Lucerne Summer Festival (14th August–13th September) this year takes laughter as its theme, examining it in all its forms: ‘as clever wit and elaborate punchlines in the music of Haydn, as bitterly angry satire in Shostakovich’s symphonies, as colourful collage in Prokofiev and Stravinsky, as laughter with tears in Mahler.’ I don’t think this necessarily has anything to do with the music of Jürg Wyttenbach and Tod Machover, the two festival composers-in-residence, however. The music of the former features in four concerts on 21st and 22nd, which include the world premiere of Der Unfall, a madrigal play for ten participants and Gargantua chez les Helvètes du Haut-Valais in a new arrangement for ensemble. Tod Machover, on the other hand, has been commissioned to write A Symphony for Lucerne, a work that will be built from sounds of the city found by the composer and its residents. It is premiered on September 5th. There will also be a series of 7 Boulez tribute concerts held on 23rd August, with his music appearing prominently elsewhere in the festival programme.

Nestled just inside the mid-Walian border, the Presteigne Festival (27th August–1st September) has a strong tradition of presenting new music, this year being no exception. There are world premieres from Michael Small, Joseph Phibbs, David Matthews, Cecilia McDowell and David Knotts. There is also an opera double bill (Welsh premieres) on 27th that examine recent historical characters: Charlotte Bray’s Entanglement is about Ruth Ellis, the last woman to be executed in the UK; Thomas Hyde’s That Man Stephen Ward charts the downfall of one of the central figures in the Profumo scandal. Outside the premieres there’s plenty of other new music to find, often imaginatively programmed around the festival’s Nordic theme.