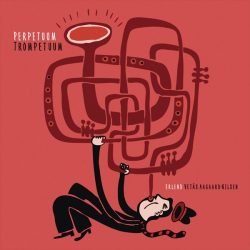 No, not a follow-up to my Brexit post—though I could easily wax lyrical about its advantages in that context—but, rather, a recent CD from Norwegian record label Lawo.

Perpetuum Trompetuum is a programme of music by Norwegian composers written for trumpeter Erlend Aagaard-Nilsen. With the exception of Bjørn Bolstad Skjelbred, the  composers on the disc are from Bergen, close to where Aagaard-Nilsen grew-up, and the music of Aagaard-Nilsen’s own father, Torstein Aagaard-Nilsen, is represented by four pieces in the programme. If this all sounds disappointingly parochial, then think again.

The disk opens in exhilarating fashion with Bolstad Skjelbred’s Resisting Gravity for piano and trumpet. The obvious stylistic influence here is Ligeti, the running lines and staccato interjections having a considerable whiff of Désordre about them. Perpetuum Trompetuum by Ketvil Hvoslef is constructed over a wandering bass line, the piece becoming a characterful dialogue between right hand and trumpet, the perpetuum mobile the glue that holds it all together. It builds to a powerful and satisfyingly diabolic climax.

Eilert Tøsse’s Signals derives its name from seven repetitions of signal-like material in the upper register of the instrument. These act as structural markers that lead into more vigorous interludes. The clarity of the structure is married to a satisfying sense of development and variety. Though the interludes share thematic material they each have a distinct character; the signals, likewise, are never merely repeated—those in the middle ending towards the lower range of the instrument, those at the end heading ever upwards.

If the evidence provided by this disk is anything to go by, Torstein Aagaard-Nilsen is a hard composer to pin down. Kverhusfanfare for solo trumpet is over in a flash, a satisfyingly well-written fanfare that is, nevertheless, not particularly original. Festoso, is very much, as the sleeve note says, in the ‘recital tradition’—a bracing three-and-a-half-minute listen that manages to be both fun and serious. Elegy for Broken Hearts, for muted trumpet and piano is, by contrast, unrelentingly stern—where the harmonic idiom in Fesotso is rich and varied, here it is uncompromisingly bleak. All of these work show an engagingly eclectic composer, though they hardly prepare one for the shift of gear that is Orpheus Lament for trumpet and electronics. Here the solo part is set against an icy electronic background pre-distilled from the trumpet line, whilst the live instrument is passed through sound modules. The effect, which expands the expressive possibilities of the instrument in a way that recalls the electroacoustic music of Jonathan Harvey, is mesmerising.

All the works up to this point take a fairly orthodox approach to trumpet playing; advanced techniques only extending to the occasional use of flutter tonguing, lip slurs or the use of microtonal inflections in the melody line. Sigurd Fischer Olsen’s Three Lamento Movements for trumpet and piano, by contrast, almost entirely strips away traditional trumpet technique. We are treated instead to three vivid sound pictures in which the player’s breath, the clicking of keys, playing with the mouthpiece only and extended passages of microtonal tuning take a central role. Knut Vaage’s MultiMORF IV takes the non-traditional approach to its logical extreme with the replacement of the piano accompaniment by live electronics. This allows the expansion of the expressive possibilities of techniques that are already ‘extended’. The work was originally intended to be played alongside video art by H C Gilje, but it stands perfectly well by itself. More than well in fact—it is an extravagantly rich and ambitious piece of sound art, the near twenty-minute span containing a plethora of aural delights. If you would like to get a taste of what it is like, have a listen to Vaage’s MultiMORF III, for trombone, here.

Perpetuum Trompetuum provides, then, a compelling snapshot of the compositional scene in Norway and a vivid insight into the expressive possibilities of the trumpet. Performances are impossible to fault: Erlend Aagaard-Nilsen makes light of the terrifying technical demands of this repertoire whilst Jarle Rotevatn provides, by turns, both sensitive and exhilarating accompaniment. If you can’t find it available for streaming (it’s on Apple Music but not Spotify) and if you have even a passing interest in contemporary brass music then consider buying this excellent disk. You won’t be disappointed.