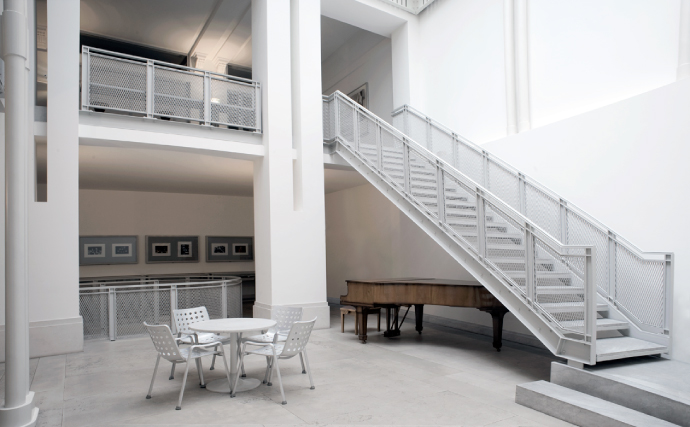 With a good friend of mine, the Mexican composer Mauricio Beltrán, I have just spent a fascinating few days in the Sacher Foundation Library in Basel, Switzerland.

Paul Sacher (1906-1999) was a Swiss conductor and musical patron. Though born into a poor family, in 1934 he came into vast riches through marriage to Maja Hoffmann-Stehlin, heiress to the Hoffmann-La Roche drug company. It was this fortune that enabled him to commission music from some of the greatest composers of the twentieth century, including Bartok, Stravinsky, Martinù, Honneger, Henze, Strauss, Birtwistle, Dutilleux, Lutoslawski, Carter and Boulez. Many of these composers, as a result of a commission, would give an autograph manuscript to Sacher as a gift. These became the basis of his collection of a host of twentieth-century composers’ scores, sketches, letters, recordings and other items, including, perhaps most significantly, the complete estate of Stravinsky, purchased in 1983. Sacher established his Foundation in 1973, his archive eventually being housed in Munsterplatz, Basel. It is one of the most important collections of its type in the world. A full list of composers with material at the archive may be found on the Foundation’s website, here.

It may seem a strange thing for a composer to want to dig around in a library for several days. Our research was, however, something I think that would be of interest to composers here: we wanted to cast some light on the composition process of Henri Dutilleux, who is notoriously reticent on the subject, viewing the moment of creation as in some sense sacred. Some of the Sacher Collection is so in demand (the works of Stravinsky especially) that one can only study microfilm of the original material. We were lucky to be able to handle the original sketches. What we found, I’m pleased to say, was a composer whose working methods would be perfectly familiar to the average pen and paper composer. Anguish, revision and self-doubt reflected in many layers of rubbings-out, scribbled margin indications and excised and sellotaped-over pages. There were, however, some exciting discoveries we made from the sketches. We’re still unpacking the implications of these and will write them up in a more scholarly manner in due course.

In the meantime, I write this simply to recommend this kind of activity as a composerly tonic. I must admit that I went to Basel with some reservations; the expense of Switzerland, the worry that we wouldn’t find anything new. The first of my concerns was undoubtedly true—we both managed, for example, to have ten minute taxi-rides from the airport that cost £35— but Basel amply rewarded us with its culture, fine food and friendly people. It is a wonderful city. Happily I needn’t have worried on the second point; our research revealed many interesting and hitherto unknown facts about the composer. But I’m not sure I would have cared if it hadn’t. A score, despite the fact that it is only musical potential energy, is a wonderful thing, the score of a great composer very wonderful indeed. And opening those pages, following the doubt and indecision, but also observing the final perfection was a great privilege. It was also inspiring. Let’s be honest: don’t we all dream that one day someone might sit in a library doing this with our own pieces?

Obituary of Paul Sacher in The Economist

Obituary of Paul Sacher in The Independent