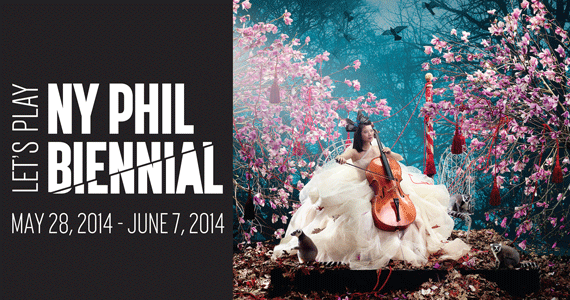 Alan Gilbert and the New York Philharmonic have big plans for their inaugural contemporary music festival, which has just got underway in New York:

“We want the NY PHIL BIENNIAL to galvanize the whole city around an immersive contemporary music experience — to take a snapshot of where music is today,” says Gilbert. “We have followed the lead of the great visual art biennial events in making this project extremely collaborative, and have reached out to a variety of curatorial voices, as well as the many other imaginative and forward-looking New York cultural organizations who have accepted our invitation to ‘come play with us’ as partners.”

The 11-day programme, which runs until June 7th, consists of 21 concerts involving more than fifty composers, hundreds of musicians and ten of New York City’s cultural institutions. New works on offer range from those by children in the New York Philharmonic’s Very Young Composers Programme to such well-known figures as Christopher Rouse, Peter Eötvös, Steven Mackey, Julia Wolfe, Matthias Pintscher, Elliott Carter, Pierre Boulez, and George Benjamin. Six new works by emerging composers will receive NY Philharmonic readings, three of which will lead to world premières. There will also be panel discussions, post concert ‘meet-ups’ with composers and musicians, national radio broadcasts and electronic media and photography installations. A festival pass is a very reasonable $95, which will get you into all the events.

On 28th Tristan Murail will be in attendance for three concerts of his music, including two UK premières. Festival Artistic Director Pierre-Laurent Aimard will makes a number of appearances performing music by composers with whom he is particularly associated, including a major project exploring Ligeti’s Études. There will also be the opportunity to hear new works by Ryan Wigglesworth and Britten–Pears young composers Louis Chiappetta, Tom Coult, Nicholas Moroz, Michael Taplin, Robert Peate and Emma-Ruth Richards.

Anniversaries, birthdays and returning friends are behind the programme for the 2014 St. Magnus International Festival, which celebrates the 200th Anniversary of the Norwegian Constitution and Orkney’s historic links with the country; 70 years since the release of the Italian POWs and the creation of the Italian Chapel; and Peter Maxwell Davies’s 80th birthday.

Premières include Cecilie Öre’s Toil and Trouble given by the BBC Singers, a new work for wind quintet by Tom Harrold, Alasdair Nicolson’s String Quartet, and a concert of world premières by those studying on the St. Magnus Composers’ Course. Works by Peter Maxwell Davies include Start Point, A Hoy Calendar, One Star at Last, three sets of songs for children, The Pole Star March and Farewell to Stromness.