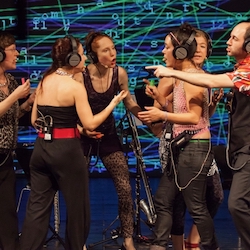 If you are looking for a stimulating weekend of contemporary music-making, I can’t recommend Leuven’s Transit Festival enough. It takes place as part of a wider festival of contemporary music—the longer Festival 20/21 concentrates on the established classics of the contemporary repertoire (and is already in progress), whereas Transit, over three days, focuses on the more cutting edge.

Last year we were treated to the imaginative, thought-provoking and sometimes playful. This included concerts of finely-worked abstract music, of pop-infected songs, of instruments that had been deconstructed and reconstructed, as well as installations and absurdist theatre (including, in the festival finale, a shoal of radio-controlled goldfish that were sent ‘swimming’ into the audience).

Amateur music-making gets a look-in on Saturday morning, with a new work for the percussions of DROM by Wim Henderickx. After lunch there is tragicomic music theatre, with the premiere of Het arsenaal der ongeleefde dingen by Mayke Nas and artist Teun Hocks. More premieres follow at 17.30, with a new concerto for fretless guitar and ensemble by Wieland Hoban, a new work from Maya Verlaak as well as pieces by Jason Buchanan and Ashley Fure. The second day ends with saxophone quartet BL!NDMAN, which will play a piece written by its founder Eric Sleichim in the early 1990s as a ‘grand statement about the reinvention of the saxophone.’ This is followed by a recent work by Simon Martin, intended as a sequel to it.

On Sunday at 14.00 pianist Nicolas Hodges will give a recital that will navigate the many challenges posed by the newest repertoire, both with and without electronics. This will include premieres by Yu Kuwabara and Georges Aperghis as well as works by Rebecca Saunders, Marco Momi, Peter Ablinger and Rolf Riehm. At 17.30 French string quartet Diotima will perform recently written works by Oscar Bianchi, Francesca Verunelli and Luc Brewaeys. In the final concert at 20:30 HERMESensemble presents a programme that, like last year’s finale, will address other senses, as well as the ears—video artist Kurt Ralske will provide a visual repose to works by Wim Henderickx and Vykintas Baltaka and there will also be a new soundtrack to the 1932 silent film Histoire du Soldat inconnu (1932) by Annelies Van Parys.

In addition to the concerts there are two opportunities to hear some of the composers talking about their music and creative inspirations in ’Sofamoments’ on Saturday and Sunday at 16:00.

To learn more about the festival: