What if East Midlands Airport had advertised for composers? 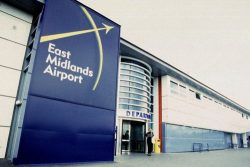 The latest request from a commercial organisation that musicians work for free has been given a withering response on social media.

The organisation in question was East Midlands Airport, who recently advertised this ‘opportunity’: “We are always looking for new ways to enhance our passenger experience whilst they are with us at the airport and, what better way than by showcasing some of our region’s best musical talent? Unfortunately we can’t offer performers a fee, but they will be well looked after by our staff while enjoying the opportunity to perform in front of a captive audience.”

One response, from flautist Nicola Loten, typified the criticism:

I am a musician based in the U.K. and I run a small, professional, baroque ensemble. We are looking for an airline to fly us to Amsterdam as I’ve always wanted to perform there. We would like to offer you the opportunity to fly us there, free of charge. Unfortunately we can’t offer you a fee but we will be well behaved during check in and it would be great exposure for the airport amongst a group of frequent travellers.

Please let me know if this would be agreeable to you,

The airport, belatedly, realised the error of its ways, saying that the advert was ‘in no way designed to undermine the skill, hard work and professionalism that is required to perform in public. We apologise for any upset caused.’

I guess we’ve seen variations of this story a hundred times over recent years, but it made me wonder about the equivalent situation with regard to composers. If players are sometimes treated with contempt by moneyed organisations (such as airports) that ought to know better, perhaps composers are in a position even more desperate still—they barely exist at all.

There have been many noble attempts to connect composers with private individuals and companies who might wish to commission music. I know of some such initiatives that have borne fruit. But they remain more the exception than the rule—commissions for pieces and ‘composer in residence’ opportunities tend to come much more from (or at least in corporation with) publicly funded bodies. And where there are real commercial opportunities, these tend to limit the scope of the composer’s creativity, since they necessarily must fulfil certain commercial expectations. (This is categorically not to belittle composers who work in genres such as film music. I personally find the ‘if it’s commercial then it’s not art’ argument beyond tiresome and, in many cases, demonstrably erroneous—think, actually, of the many very great film scores.)

It would have been be nice if this airport in question, instead of saying to itself ‘We need to show off the musical talent of our region, let’s invite performers to come and entertain our passengers’ had maybe thought ‘Let’s invite some composers here to make some pieces, or even do some creative workshops and events with passengers.’ If they had advertised this and offered no fee, my guess would be there would have been no outcry whatsoever. Many composers would have seen it as progress.