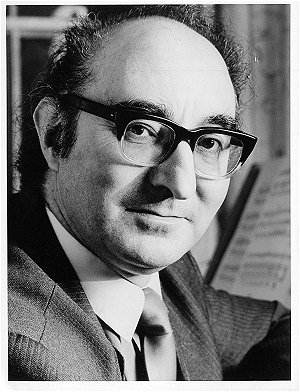 A short guide to the music of William Mathias, who died 20 years ago on 29th July.

I hail from the same part of the world as this most brilliantly communicative of composers. As with all who attended the old grammar school in the unexceptional town of Whitland, Carmarthenshire, I used to sing a work by Mathias at the beginning and end of every term, his School Song. Born in the town in 1934, Mathias had written the piece whilst a pupil at the school at the age of 11 or 12. It is a precocious work, with a shapely tune that comes to a rousing close, supported by effortlessly successful harmony. It is sad that, on turning comprehensive in 1989, the School Song, possibly Mathias’s most performed work, was dropped.

The gusto with which normally unparticipative pupils sang Mathias’s School Song suggests that his ability to communicate was an inherent part of his musical personality. It was a tendency that would eventually leave him, like Britten, at odds with the post-war avant-garde. Mathias was acutely aware of this. At the 1979 Menai Music Festival Lecture, he articulated his personal view that early twentieth-century innovations had led not, as some in the avant-garde believed, to a new unified system, but to the disintegration into various systems in which a composer should find his own place. It now seems obvious that this view was correct. As for his position in this pluralistic scene, in a BBC documentary devoted to his music, he railed against what he saw as the limited expressiveness of some twentieth-century music, which, he felt, sometimes gave the impression ‘that music is there to talk insistently about tragedy, that it must always be unpleasant because that is the essence of our time.’  He underlined this by going on to say that ‘music…does many things: it can be tragic…[but]…it can also be extremely happy and it can be, in my view, an act of praise.’

These statements provide the key to understanding Mathias’s music. The composer showed an uncanny knack for writing music of great range, both within pieces and between pieces, which nevertheless sounds like it is by the same person. By this I mean that he was just as capable of writing a good tune forged from tonal materials (though not actually using tonal procedures) as well as ‘difficult’ textures with high levels of chromatic density. As with the music of Benjamin Britten, this makes him a good starting point for those wishing to become accustomed to the sounds of new music. This was the function Mathias served for me as a teenager as I gradually got to know his music. It unlocked my ears, accustoming me to more adventurous sounds, which then allowed me to explore more experimental music.

The most familiar works by Mathias are his carol sequence Ave Rex, which includes the perennially popular Sir Christemas; A Babe is Born; and Let the People Praise Thee O God, the anthem written for the ill-fated wedding of Charles and Diana. All are rollicking pieces, superbly written for maximum tuneful effect. Whilst there are many other works in a similarly attractive style, Mathias also wrote more serious church music. There is the visionary and transportive As Truly as God is Our Father, the astringent Jesus College Service and the cerebral Four Latin Motets. There are three good discs for those who wish to explore this music: Christ Church Cathedral Choir conducted by Stephen Darlington on Nimbus, Wells Cathedral Choir and Matthew Owens on Hyperion and one released by the American choir Gloriae Dei Cantores, conducted by Elizabeth Patterson. My personal favourite, especially because of the immediacy of the recording, is Stephen Darlington and Christ Church. A better choice for newcomers, however, might be Matthew Owens and Wells Cathedral, since the disc also contains several of Mathias’s organ works, including his catchy Processional. This provides a way into his substantial and serious organ works such as Berceuse, Antiphonies and Fenestra. These have been recorded both by John Scott on the organ of St. Paul’s Cathedral on Nimbus and Reichard Lea (in a double disc survey of Mathias’s complete organ output) on the organ of Liverpool Metropolitan Cathedral on Priory.

Mathias was also known for his large choral-orchestral works. One of these, World’s Fire, is, sadly, unrecorded. This Worlde’s Joie, Mathias’s rumination on the seasons of the year and the stages of life, is available on Lyrita with an orchestral version of Ave Rex and his powerful setting of the thirteenth-century poem Elegy for a Prince. Perhaps his choral best (a phrase he himself used of the work) is, however, his Requiem Mass written in memory of his mother, Lux Aeterna. Whilst clearly deriving inspiration from Britten’s War Requiem it is, in contrast, a work of extraordinary radiance. It is available in an electric performance with the LSO and Bach Choir conducted by Willcocks on Chandos. It is one of my most treasured recordings.

Mathias’s output also includes a number of concertos, three symphonies and a wide variety of chamber music. Symphony No. 1 and Symphony No. 2 Summer Music are available on Nimbus with the BBC Welsh Symphony Orchestra (now the BBC National Orchestra of Wales) under the baton of the composer. They make a fascinating pair. The first energetic and tuneful, the second dark and brooding. The years between the two symphonies were marked by orchestral works that Mathias called ‘landscapes of the mind’: Laudi, Vistas, Helios and Requeiscat. Helios and Requiescat, are available with the Third Symphony and Oboe Concerto, also with BBCNOW on Nimbus. Laudi and Vistas are available on Lyrita together with some early works — Dance Overture,  Divertimento for String Orchestra, Invocation and Dance and Sinfonietta — that are both brilliantly written and outrageously good fun. The middle movement of the Harp Concerto shares both thematic material and the lamenting atmosphere of Elegy for a Prince, but is typically framed by two highly attractive and accessible movements. It is also available on Lyrita together with his Clarinet Concerto and the infectiously raucous Piano Concerto No. 3. For those interested in exploring Mathias’s chamber music I recommend two discs: a recording of his three string quartets with the Medea Quartet on Metier and a disc that includes Mathias’s Sonata No. 1 and No. 2 and Piano Trio on Koch.

For more information, visit the composer’s page at OUP.